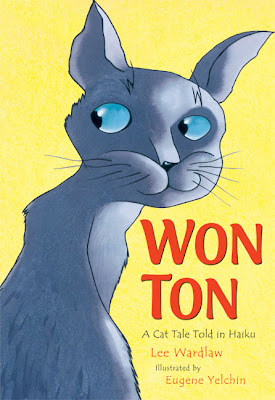 You know how cats are mysterious? And remember when I pretended to be a cat while I read CAT SECRETS by Jef Czekaj so that I could find out the secrets cats keep? Remember how I didn’t find out any cat secrets?

Look what I discovered by myself.

I took the word “poem” and spelled it backwards.

Do you see what I see?

How about now, without the “P” at the end?

What if I add one extra letter?

MEOW! You know what this means, right?

Cats are poets! Just like the cat in WON TON: A CAT TALE TOLD IN HAIKU who has secret inner poem thoughts!

Remember how the cat looks mysterious on the cover because he’s looking sideways? He looks sideways a lot in the book because he’s thinking a lot of secret thoughts. His thoughts are about being lonely at the animal shelter and being afraid when he goes to a new home with Boy. When he gets there, he’s careful not to like it too much. He already ended up at the shelter once, so he’s probably afraid it could happen again. I think that’s why he acts like he’s not interested in playing or in the food Boy gives him. And at first he isn’t ready to share his real name with Boy after Boy names him Won Ton. Poor cat.

In the next part of the book he acts like a cat. He has cat breath. He throws up in a shoe. He scratches furniture and knocks over a lamp. Maybe he got in trouble for being a cat before, but he doesn’t this time so he starts to relax and enjoy being a cat again. He finally admits he wants to play. He feels like Boy’s home is his home. He defends his yard from intruders.

Even though the cat’s secret poem thoughts are short, when you read them you learn a lot about him and how he feels. Some of the poem thoughts are sad. A lot of them are funny. I like the pictures in the book, too. One picture that makes me laugh is of the cat in a pink dress and hat. Poor cat.

My Senryu About The Cat

My Senryu About Me

I have a secret.

If you spell the author’s name backwards you get “eel.” I haven’t found out the connection between cats and eels yet. When I do, I’ll report back here.

If you spell the title of this book backwards you get “not now.” That’s the opposite of when you should read this book. Read this book right now!

When I go swimming I don’t like to put my head under the water, so I won’t be able to check to see if the catfish are playing with the eels. I’ll ask my friend Penny C. Monster to check for me.

Please tell Mai Tai, Papaya, and Koloa that I would like to be friends and play sometime. I like their names.

What an original and cute blog! Love the information you get about books and the way it's delivered. Great work, Bigfoot!