Z IS FOR MOOSE (PICTURE BOOK) 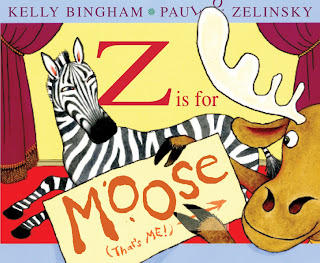 I’m Violet and I am going to tell you about a funny picture book called Z IS FOR MOOSE.

If you know your ABCs you know that “Moose” does not start with the letter Z. If you don’t know your ABCs I will tell you that “Moose” starts with the letter M. Because this book is called Z IS FOR MOOSE you probably think that the author of this book does not know her ABCs. But if you think that you are wrong. The author of this book is just very funny and she wrote a funny picture book about a funny moose named Moose who is very happy to be in an alphabet book.

My name starts with the letter V and that is the twenty-second letter of the alphabet and that means if I were in an alphabet book I would be on the twenty-second page. Moose’s name starts with the letter M so he should be on the thirteenth page. But Moose is an eager beaver moose so he shows up on the fourth page and that is the page for the letter D and Duck gets mad. When Moose shows up on the E page Elephant gets mad.

Moose isn’t on the page with the letters F and G so you probably think you won’t see Moose again until the M page. But if you think that you are wrong. Moose shows up on lots and lots of pages before the M page because he is too excited to wait. I am not sure if Ice Cream gets mad at Moose because Ice Cream does not have a face but Zebra is in charge of the alphabet book and he gets mad at Moose for not waiting his turn.

On the M page something happens that is a surprise and that surprising thing makes Moose very mad and then very sad but it makes readers laugh because it is a funny surprise. I want to tell you what the funny surprise is but I won’t because if I did then you wouldn’t be surprised.

There is something I will tell you and that something is that Moose is on lots and lots of pages after the M page and that is good because I love Moose.

Do you know which page Moose isn’t on? The V page! But don’t worry because Moose is on lots and lots of other pages and that is good because you will love Moose.

Z IS FOR MOOSE is so funny and you will want to read it lots and lots of times and every time you read it you can look at the funny things happening in the pictures. My favorite funny picture is on the K page and on that page Moose is peeking out of a mama kangaroo’s pouch.

Moose causes lots and lots of trouble in this alphabet book. Moose wouldn’t cause so much trouble and make a duck and an elephant and a zebra and probably an ice cream mad if he could be in an alphabet book all by himself. Here is an alphabet book with just a moose in it:

A is for Antlered moose.

B is for Big moose.

C is for Cute moose.

D is for Dear moose.

E is for Eager moose.

F is for Funny moose.

G is for Good moose.

H is for Handsome moose.

I is for Itchy moose.

Readers who are learning their ABCs.

Readers who already know their ABCs.

G is for Good-bye.

Nice review, Violet. Good dog. I'm glad this book will appeal to mice. I tend to like the same things mice do (cheese, rice, chewing on wires), so I will probably like this book.

Wow, what a great review, Violet! Thank you! I'm so glad you enjoyed Z IS FOR MOOSE! And I bet MOOSE will be thrilled by it, too...I will show him. I say "V" is for a Very Good Book Reviewer!

Hi Anne, If you like the same things that mice like then you will like Z IS FOR MOOSE and I know it will make you laugh. Good-bye.

Hi Kelly, I am glad you like my review because I like your book and I wanted to write a good review for it and tell everybody how much I love Moose and the funny things he does in the book you wrote. Good-bye.

Hi. I have something to tell you and that something is that you can win an autographed copy of Z IS FOR MOOSE if you go to the author’s Web site and send her an email and then she will have a drawing and if she draws your name then you will win a copy of Z IS FOR MOOSE that is autographed. If you don’t know what an autograph is I will tell you. It means that the author will write her name on the inside of the book and that will make this special book extra special.

Email her by March 31 and maybe you will get lucky. You can find out more about her contest by clicking HERE.