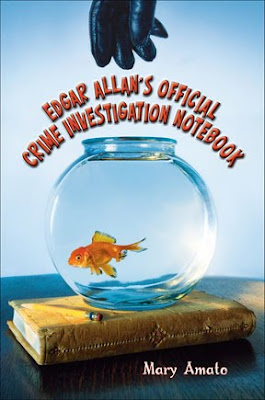 Thank you so much for participating in Book Talk Tuesday! I love, love, love the review of this book- so much that I just placed a hold on it at the library. And how did I miss this book last year? Where have you been all my life? And, I support the policy that Big Foot has... does that really happen in this book?

Yes, that thing really does happen in this book. So please don't tell Bigfoot or I'll be in big trouble!

This sounds like such a fun read! Thanks for sharing! I'm kinda of, sorta really sad that my public library doesn't have this one...maybe I'll suggest that they buy it.

Jessi @ Reading in the Corner

Anonymous, I understand. This is a hard book to put down. If you read ahead, I promise I won’t tell on you. In return, don’t tell Bigfoot about that pesky page 84. Deal?

Jessi, If you convince your library to buy it, you will be a hero. The other library patrons will carry you through the stacks on their shoulders while cheering “hurray for Jessi!” Then the librarian will probably kick you all out for making such a ruckus. So be sure to check the book out before you get yourself banned from the library.

Love it! Now I really will have to check this one out!

I really liked Mary Amato's Naked Molerat Letters and I want to read this one. But maybe with that thing that happens in this book....I hate those kinds of books!! But maybe I'll still pick it up! Great review!

Karen:
The key is to check out the book without causing a library ruckus like the one at Jessi’s library. Getting banned from the library is a bummer. Believe me, I know.

GreenBeanTeenQueen:
Yes, that thing does happen (unless Bigfoot asks—then it absolutely did not happen) but don’t let it stop you from reading this book. It’s a sad part, but it’s just a PART of the story. It happens on the side. Like french fries. French fries add to the meal, but the meat is in the main course. I guess that could be a problem if you’re a vegetarian. Now that I think about it, with a name like GreenBeanTeenQueen you might be. How about sprinkles on ice cream? So you’re sad when the sprinkles are gone but the ice cream will distract you with all its cold yummy goodness. And the cone…hmmm, what do you suppose the cone stands for here? The poems? No. That doesn’t make a lick of sense. Forget the cone. You’re eating your ice cream with sprinkles in a dish and the sprinkles are pretty and add some nice texture, but they are really more of a sidekick to the ice cream. Yes! Sidekick! Your ice cream can fight crime on its own without the sprinkles, even though the sprinkles do help out by lugging around the grappling hook.

What were we talking about?