So Penny came up with this thing she’s calling S.C.R.E.A.M. We’re all supposed to blog about our favorite books to read around Halloween. I know Penny. To her, Halloween means horror. But I don’t go for the scary stuff. Call me crazy, but I like sleeping with the light off. I’m all about the funny.

A FATE TOTALLY WORSE THAN DEATH 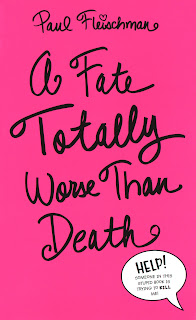 Not that funny can’t be dark. Take the first book on my list, A FATE TOTALLY WORSE THAN DEATH. It’s got what I’d call the perfect balance of humor and horror. Three vain, shallow, mean girls—Danielle, Tiffany, and Brooke—decide to put their classmate, Charity Chase, in her place for infringing on their boyfriend territory. The place they put her is the bottom of a cliff.

Enter Helga, a beautiful foreign exchange student who commits the same offense as Charity Chase. The mean girls’ plans to warn Helga off don’t go too well. They suddenly develop distracting ailments including, but not limited to: loss of hearing and bladder control, arthritis, gray hair, and liver spots. The girls become convinced that Helga is to blame and that she’s really the ghost of Charity Chase come back for revenge.

You may be asking, “Bigfoot, what’s funny about a nice girl being chased off a cliff and a vengeance curse?”

Good question. The author could have written this story in a way to make readers feel creeped out by this supernatural scenario. If he had, this book would be on Penny’s S.C.R.E.A.M. list. But because the author chose to present the main characters as over-the-top representations of superficiality, it’s on my list instead. It’s impossible not to be amused as the girls fret over the loss of their youthful beauty which is to them, as the title states, “a fate totally worse than death.”

THE BOOK THAT EATS PEOPLE 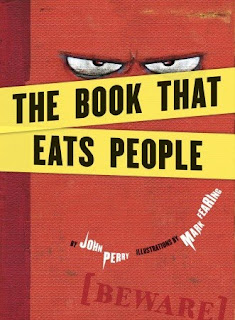 Dark humor also pops up in this picture book for younger readers. The idea is that THE BOOK THAT EATS PEOPLE eats people. By holding the book, you’re risking being eaten by it. The book alternates between warning readers that the book is dangerous and telling about the book’s previous victims. The comically disturbing illustrations show the book stalking and eating its human prey.

Full Disclosure: I laughed while reading this book. I really did. But then I was relieved to return it to the library. Don’t judge me.

Like I said, Penny likes a book with some nightmare-inducing potential. She really loves a book with a ghost. Not all ghost stories have to be scary, though. One of my favorite ghosts appears in the 42 OLD CEMETERY ROAD series. Olive C. Spence might be a little gruff now and then, but she wouldn’t hurt a fly—or a crusty old writer.

DYING TO MEET YOU 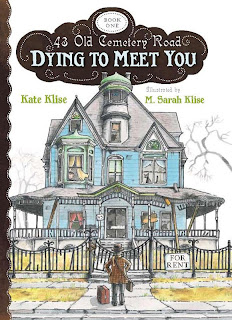 In DYING TO MEET YOU, we meet the three main characters: Ignatius B. Grumply, a crusty old writer; Seymour Hope, an eleven-year-old boy whose parents abandoned him; and Olive C. Spence, a sometimes-gruff ghost. I almost forgot Seymour’s cat, Shadow. That makes four.

Ignatius has a deadline to meet, but he can’t seem to get any writing done. It’s a shame, because he’s already spent his $100,000 book advance. He decides to rent a house where he can work with no distractions. The bad news: he picks a place inhabited by a kid, a cat, and a ghost. Not that he believes in them. Ghosts that is. He believes in kids. He just doesn’t like them. He’s not too thrilled about cats, either. He’s allergic. The good news: Seymour, Shadow, and Olive pull Ignatius out of not only his writing slump, but his whole slump of a lonely life.

This book is told as a collection of letters, newspaper articles, and Seymour’s drawings. It’s full of classic Klise humor including clever wordplay and eccentric characters. Like Ignatius’s book publisher, Paige Turner, this book is a page turner. You’ll finish it in a hurry and have plenty of time to read the two sequels before Halloween.

OVER MY DEAD BODY 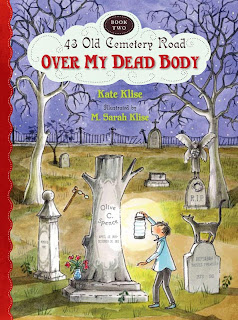 The second book in the series actually takes place at Halloween. Dick Tater wants to ban Halloween. That means no tricks or treats. And, he’s declared that all ghost stories are to be burned. That poses a problem for Ignatius, Seymour, and Olive who write ghost stories. Even worse, Dick Tater convinces the townspeople Olive doesn’t existence. I can tell you from personal experience that not being believed in can make a body cranky.

TILL DEATH DO US BARK 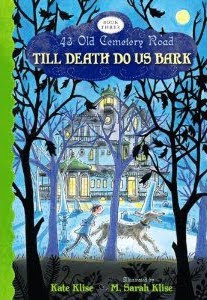 The third book continues with Ignatius, Seymour, Shadow, and Olive living together and writing their serialized ghost stories. But their unique family is going through some growing pains. The richest man in town dies, leaving behind his beloved dog. Seymour’s deceptive tactics to keep the dog cause the entire family to re-evaluate their situation. Once again, in the funniest possible way, all the problems are solved with the assistance of ghostly intervention.

THE BEST HALLOWEEN EVER 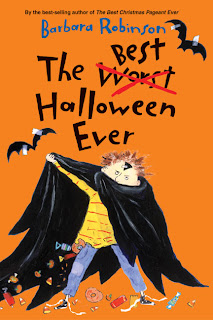 Last year I recommended THE BEST CHRISTMAS PAGEANT EVER in our “Season’s Readings” list. If you took my advice and read it, you know the infamous Herdman kids nearly ruined the town’s annual Christmas pageant, but ultimately ended up refreshing everybody’s holiday spirit by reminding them of the true meaning of Christmas.

Not that the Herdmans need a special occasion to stir up trouble, but they really shine on Halloween. To avoid the Herdman’s annual campaign of terror, the mayor decides to replace trick-or-treating with a party at the school where the Herdmans won’t be able to pull their usual shenanigans. Of course, it’s never a good idea to underestimate the Herdmans. Like with Christmas, the Herdmans remind everybody the of true meaning of the season. Halloween just isn’t Halloween without a few good scares.

Okay, okay. Maybe I could learn a little something from this book. Maybe I’ll check out my friends’ Halloween recommendations and pick out one of the scarier books to read.

I guess I can always get a night light.

I can't wait to read thse. I love the Cemetary Row series as well. I'm a little worried about the book that eats people--but intrigued, too. It's not every day you come across a book like that. I'll check it out!

I love your font - what is it please?

Thanks for posting about the Cemetery Road books. I just bought the last two and will now have some clue about how to booktalk them with the kiddos.

Loved the first Cemetery Road. I have to read the other two. And The Book That Eats People? I'll gobble up that one as well. Thanks for a fun list!

Ann, it seems strange to say, but the scariest book on this list is actually the picture book.

Kelly, please report back so I know you didn’t get eaten by that book. Kidding. Sort of.

AISB, the font we use for the posts is Verdana. If you’re wondering about the font in our blog’s logo, that’s called Dannette and it’s sold by a font foundry called Fonthead Design. The font used in the word bubble is also by Fonthead and is called Comic Talk.

Catherine, I think you’ll enjoy the other two books in that series. There’s a fourth due out next May titled THE PHANTOM OF THE POST OFFICE. And I like your idea of a mano a libro smack down. I’ll be rooting for you!

I haven't read any of these! (Rubbing hands with glee!) Thanks for the spooky-delicious round-up.

P.S. Do I need to have a rescue plan in place before reading that book that eats people? (Isn't that cover clever? I love how they turned the author, etc. names into the toothy evil grin.)

Megan, Well, I managed to survive. But then I’m not a person, strictly speaking, so it could be that I was never on the menu. I say you can never be too careful. Best to make yourself less palatable. Try anti-garnishing yourself by slathering on horseradish or tucking a chili pepper behind your ear.

I agree—the cover is fantastic. I especially like the caution tape title. The book is clever from cover to cover.