Super Creepy Reading Extravaganza A la Mode
I’m Violet and I love Halloween because I love treats and costumes and carving pumpkins and running through corn mazes and making spider decorations and making witch decorations and making skeleton decorations. But do you know what the best part of Halloween is? If you don’t know I will tell you that the best part of Halloween is that you get to read Halloween books. And if you don’t know what some good Halloween books to read at Halloween are I will tell you.
BY THE LIGHT OF THE HALLOWEEN MOON
by Caroline Stutson, illustrated by Kevin Hawkes
[PICTURE BOOK]
Marshall Cavendish, 2009 (originally: Lothrop, Lee & Shepard, 1993) 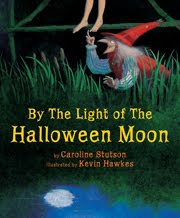 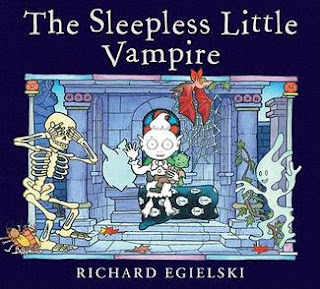 If you like Halloween books that have lots of different Halloweeny creatures you will like THE SLEEPLESS LITTLE VAMPIRE. The little vampire is trying to go to bed but he can’t fall asleep and he wonders if it’s because of all the creatures who are making noise and those creatures are spiders and bats and cockroaches and a werewolf and skeletons and a witch and ghosts and all those creatures are dancing and making noise. But there is a surprise reason why the little vampire can’t fall asleep but I’m not going to tell you what the reason is because that would ruin the surprise. I like this book and the pictures in this book are fun to look at and I like the ghosts who look surprised even before the surprise ending and I like that the little vampire’s cuddly sleep-time toy is a Frankenstein’s monster and that his blanket has pictures of skulls on it.
I NEED MY MONSTER
by Amanda Noll, illustrated by Howard McWilliam
[PICTURE BOOK]
Flash Light, 2009 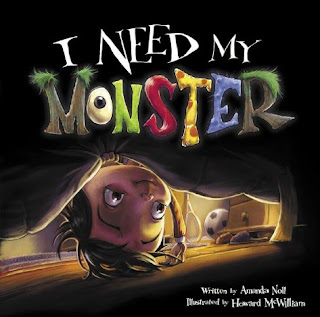 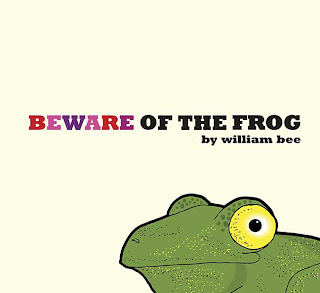 Monsters like under-the-bed monsters can be scary but this is a book about a creature that even monsters are scared of and that creature is a frog. The monsters in this book are a goblin with a striped hat, a blue troll, and an ogre who carries a fork with him in case he runs into somebody he wants to eat. You wouldn’t think a frog could scare monsters but this frog protects Mrs. Collywobbles from the monsters who come to her house and he protects her by eating the monsters and that is funny because he swallows them whole even though they are bigger than he is. After the goblin and the troll and the ogre have been eaten up Mrs. Collywobbles kisses the frog to thank him and then some funny things happen that I won’t tell you about because you’ll have more fun reading this book if you are surprised at the ending. And I bet you are thinking that the frog eats Mrs. Collywobbles at the end because that would be surprising but I promise that is not what happens.
BABYMOUSE #9: MONSTER MASH
by Jennifer L. Holm, illustrated by Matthew Holm
[GRAPHIC NOVEL]
Random House, 2008 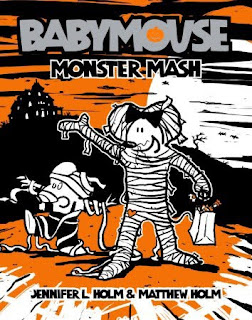 Halloween isn’t just about vampires and witches and skeletons and ghosts. Halloween is also about treats and costumes and what costume you wear to go trick-or-treating in so that you can get treats. This Babymouse story is about how Babymouse wants to be a zombie for Halloween but Felicia the mean cat and the other mean girls tell her that only boys wear scary costumes so Babymouse feels like she has to wear a fairy costume instead. And then Felicia invites herself and the other mean girls to Babymouse’s Halloween party and Babymouse gets stuck going trick-or-treating with them and she doesn’t have any fun because they make her do mean tricks to the neighbors like throwing eggs at their houses and they also steal candy from little kids. I like Babymouse books especially when Babymouse has daydreams and in this book she daydreams that the Creature from the Black Locker lives in her locker and that Felicia is a blood-sucking vampire. At the end of the story Babymouse puts on her zombie costume and the mean girls get scared away and Halloween is saved.
MERCY WATSON: PRINCESS IN DISGUISE
by Kate DiCamillo, with illustrations by Chris Van Dusen
[EARLY READER]
Candlewick, 2007 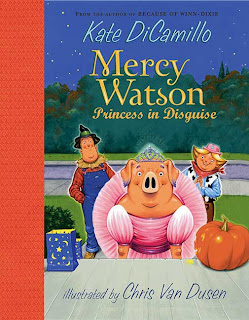 Mercy Watson is a pig and she’s like Babymouse and doesn’t want to wear a frilly Halloween costume. Mercy doesn’t want to wear any costume at all. She just wants the trick-or-treat treats and so she wears the princess costume that Mrs. Watson makes for her. The costume is funny and there is a picture of Mercy in her costume and it is pink with a big pink bow and she has a tiara too and in case you don’t know what a tiara is it is a fancy crown that princesses wear. Mercy does not look happy about wearing the costume but she loves buttered toast and she thinks she will get buttered toast if she wears a costume and goes trick-or-treating. If you have gone trick-or-treating you know that buttered toast is not one of the treats that people give trick-or-treaters so it is funny that Mercy thinks she will get buttered toast on Halloween. Mercy always causes lots of problems in her books even though she doesn’t mean to and she causes problems in this book by chasing the neighbor ladies’ cat and then a lot of people in costumes chase Mercy while she is chasing the cat and that is funny. Mercy doesn’t get get buttered toast when she goes trick-or-treating but everybody gets buttered toast at the Halloween party at the end.
THE COSTUME COPYCAT
by Maryann Macdonald, illustrated by Anne Wilsdorf
[PICTURE BOOK]
Dial-Penguin, 2006 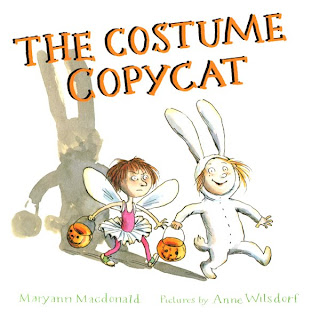 I love I Need My Monster. Such a cute story. I just got my daughter Creepy Crypt of ABC. That's a great Halloween ABC book for young ones.

What a great, great round up of halloween books to check out! Thanks for sharing!

Wow. This is a great list. The illustrations for The Sleepless Little Vampire and The Costume Copycat look especially cute. Hope our local library carries some of these!

Hi Kerry, I hope your library has these books too because they are really good and you are right about the cute illustrations in THE SLEEPLESS LITTLE VAMPIRE and THE COSTUME COPYCAT and THE COSTUME COPYCAT might give you some good ideas for what to dress up as for Halloween. I think I am going to dress up as a kangaroo because then my kangaroo pouch can hold all the treats I get when I am trick-or-treating.