Super Creepy Reading Extravaganza A la Mode
Zulko, humans. Today I’m presenting my suggestions for Halloween reading. I don’t claim to entirely understand Halloween and its morbid trappings; however, I cannot deny that I’ve experienced the allure of the macabre. I’m particularly taken with the notion of zombies. At first my interest in zombies was piqued because I was under the impression that they are real, and, as a student of Earth, I wanted to learn all I could about them.
THE ENEMY
by Charlie Higson
[YOUNG ADULT]
Hyperion-Disney Book Group, 2010 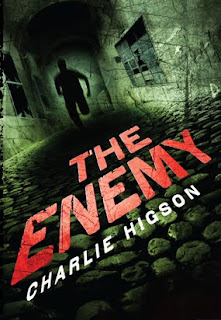 It was while reading THE ENEMY by Charlie Higson that this misunderstanding began. I believed the book to be a historical account of a devastating illness that ravaged London, England, afflicting every human being sixteen years of age and older with a dreadful disease that rotted their flesh, inhibited their vocal abilities, and made them crave human flesh. I was dismayed when I could find no further account of the events described in THE ENEMY. It was then that Bigfoot informed me that zombies are no more real than are Ewoks. This clarification didn’t dissuade my interest in zombies, nor did the later revelation that the antagonists in THE ENEMY are not technically zombies. They’re merely humans infected with a disease that makes them crave human flesh, as opposed to corpses who crave human flesh. That resurrection from death is compulsory to becoming a zombie was a distinction I failed to comprehend at first. Although it isn’t technically about zombies, THE ENEMY inaugurated my fascination with zombie literature. While I’m still at a loss to understand my desire to read about monstrous undead humans who eat other humans, I cannot deny that desire exists. Due to my innumerable scientific obligations, I haven’t yet read as extensively in the zombie genre as I’d like. Here’s a sampling of books that I intend to read to further my understanding of zombies and their appeal to readers:
THE DEAD: AN ENEMY NOVEL by Charlie Higson
[YOUNG ADULT]
Hyperion-Disney, 2011
THE UNDERTAKERS: RISE OF THE CORPSES by Ty Drago
[YOUNG ADULT]
Sourcebooks Jabberwocky, 2011
ZOMBIE MOMMY: A PALS IN PERIL TALE by M.T. Anderson
[MIDDLE GRADE]
Beach Lane-Simon & Schuster, to be released October 25, 2011
ZOMBIE IN LOVE by Kelly DiPucchio, illustrated by Scott Campbell
[PICTURE BOOK]
Atheneum-Simon & Schuster, 2011
THE MONSTEROLOGIST: A MEMOIR IN RHYME
by Bobbi Katz, illustrated by Adam McCauley
[PICTURE BOOK—POETRY]
Sterling, 2009 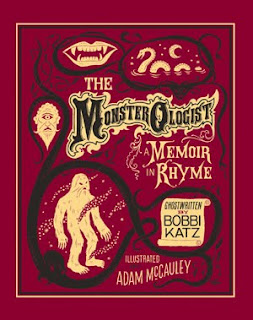 Zombies aren’t the only beings whose authenticity perplexed me. My Earth friends delight in taking advantage of my naiveté. Convincing me of the existence of fictitious creatures is one of their favorite pastimes. Norman especially takes pleasure in deceiving me. Recently he directed me to THE MONSTEROLOGIST: A MEMOIR IN RHYME, a book that ostensibly presents research accumulated by a scientist specializing in the studies of exceptional Earth creatures. That the “research” is presented as poetry probably should have alerted me to the fictive nature of this book. But perhaps I can be forgiven for falling for Norman’s trick given that THE MONSTEROLOGIST includes descriptions of some beings I know do exist, namely: the yeti; the Loch Ness Monster—who I have never met personally, but Penny told me her great uncle Bill used to date her; and, of course, extraterrestrials—although in retrospect I’ve never heard of Zargon 9 and I’m incredibly well-travelled. Or perhaps it was my newfound enthusiasm for poetry that distracted me from Norman’s joke. Whatever the case, once I determined the book was indeed a work of fiction, I noted that not only are the poems pleasing to hear read aloud, they’re quite amusing. For example, one poem describes how a yeti came out from hiding to steal and then abscond with the Monsterologist’s spaghetti. The yeti/spaghetti rhyme tickled Mortimer as well. Another favorite of mine is the poem about the Verbivore who subsists on a diet consisting of words that describe actions. Not only are the poems entertaining, the accompanying collage-style illustrations give the reader much to contemplate.
Conclusion: Norman intended to give me a trick, but I was the recipient of a treat.
THE ESSENTIAL WORLDWIDE MONSTER GUIDE
by Linda Ashman, illustrated by David Small
[PICTURE BOOK—POETRY]
Simon & Schuster, 2003 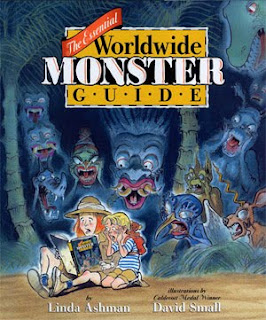 Because I rather enjoyed the combination of monster lore with poetry, I sought out similar collections and discovered THE ESSENTIAL WORLDWIDE MONSTER GUIDE. Like THE MONSTEROLOGIST, this book contained beings I know to be real, such as Bigfoot and the Loch Ness Monster. It also introduced me to new beings to wonder about such as the Alicanto, the Domovik, and Ki-lin. The underlying narrative—mostly shown in the lively watercolor illustrations—is of a girl, boy, and basset hound taking a tour of the world by way of hot air balloon in search of monsters. A country of origin is listed for each “monster” they encounter. I’m uncertain if those origins are meant to represent where the myth of each creature was born, or where the creatures actually reside. I do tend to believe this book is fiction. Either that, or the author didn’t research her subject matter as studiously as she should have; the poem about Bigfoot suggests he’d steal a person’s coat during a blizzard—inconceivable. Amusing, but inconceivable.
Good-bye for now, humans. This Halloween may the zombies you encounter be costumed trick-or-treaters and the candy corn you eat, plentiful.
at 6:38 PM