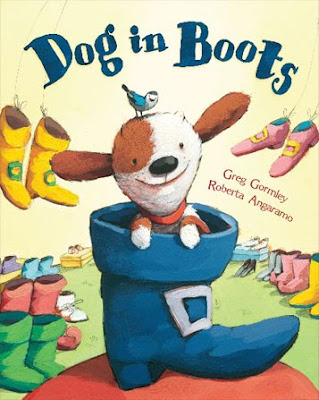 I’m Violet and I don’t wear boots but the dog in the book I’m going to tell you about tries to wear boots and it is a funny book because dogs should not wear boots unless they are sled dogs.

The dog who tries to wear boots in this book is not a sled dog and his name is Dog. Dog likes to read and at the beginning of this story he is reading a book called PUSS IN BOOTS and that is a real book that maybe you have read. It might be a book about a sled cat but I don’t know because I have never read PUSS IN BOOTS. But Dog reads it and after he does he wants to wear boots and so he goes to the store and buys some boots and he has to buy four boots because he has four paws. Poor Dog finds out that he can’t dig when he is wearing the boots and dogs like to dig so Dog returns those boots and gets some different boots that are rain boots. And you might think the store wouldn’t take back the boots because Dog wore them while digging but the man at the store is nice and lets Dog trade in the boots for rain boots. But you know what? Not all dogs like to swim but Dog is a dog who likes to swim and when he is wearing the rain boots he can’t swim because the rain boots make him sink. That is a funny page because the fish in the pond are surprised to see a dog at the bottom of the pond and there is also a smiling frog in that picture. I like that picture.

Dog keeps going back to the store and getting different things to put on his paws but they all cause problems like how Dog can swim when he is wearing flippers but he can’t scratch behind his ears when he is wearing flippers. Dog even tries to wear high heels but he finds out that it is hard to run in high heels and that is a funny picture too. In the end Dog figures out what he needs to wear on his paws but I’m not going to tell you what that is because you can find out for yourself when you read this book.

The pictures are so good and when Dog has troubles with his boots and his flippers and his high heels and his skis you will laugh because those are funny pictures. And you will laugh at the end of the book when Dog reads another book that is also a real book that maybe you have read and that book is called RED RIDING HOOD. I have read that book before so I know what Dog will probably try to wear next and I think Dog will look good in a red riding hood even if he won’t be able to roll on dead fish very well while he is wearing it. And if Dog carries a basket like Little Red Riding Hood does he can put all of his bones and his books in it and take them with him when he visits his grandma.

I can see a whole series: Duck in Boot, Elephant in Boots, Flamingo in Boots… Oh, the possibilities.
Cute!

I'll have to read this story to my dog. He hates wearing his boots whenever it snows.

Mirka you are funny and you made me laugh. I would like to read a book about flamingoes and elephants and ducks wearing boots. They would probably look good in red riding hoods too. Good-bye.

Catherine your dog would like for you to read this book to him but you maybe shouldn’t read this book to him because if you do the next time you try to make him wear his winter boots he will remind you of this book and say “I am not going to wear those boots because dogs shouldn’t wear boots.” He will say that only sled dogs need to wear boots and that is what I thought too until I remembered how cold my paws got last winter and I think now that I would like to wear boots in the winter to keep my feet warm even if I couldn’t dig while I was wearing them. And I was also thinking it might be fun to be a sled dog too. And maybe your dog doesn’t like the color of his boots and if you got a different color for him maybe he would like to wear his boots. Violet is a good color for boots. Good-bye.