THE DEFENSE OF THADDEUS A. LEDBETTER (Middle Grade)

by John Gosselink, with illustrations by Jason Rosenstock 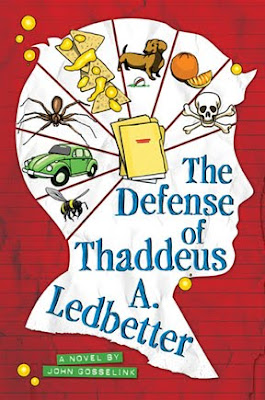 Thaddeus A. Ledbetter knows a lot.

He knows that adults

He knows that oranges

are a dangerous source

He knows that some

situations can be controlled

and we’d all better be

prepared for the ones

Most importantly, he knows

that the people he knows

don’t know what he knows.

So he tells them. Often.

If only those people weren’t advice-ignoring alarmists, they’d be thanking Thaddeus for bringing them up to speed. But no. Instead, Thaddeus is banished to In-School Suspension for the rest of the school year for some unfortunate incidents—yes, plural, incidents—that weren’t even his fault.

Take what happened on the school field trip. Thaddeus misidentified a fat man as a car during a Slug Bug Competition. The string of events that then led to that man being hit by the school bus weren’t Thaddeus’s fault. And the narrowly averted mass choking of senior citizens? Thaddeus was just bringing the gift of nutrition to the residents of Crooked Creek Nursing Home. It’s not his fault oranges don’t come with warning labels. Sure, he may have set one pastor on fire, but why didn’t he get credit for saving that same pastor who didn’t have the good sense to “stop, drop, and roll”?

Thaddeus uses his time in In-School Suspension to build a case defending himself. Once his side of the story is told, even the principal will have to admit that the True Emergency Drill—Thaddeus’s unauthorized drill enacting a concurrence of irresponsible adult drivers, a tornado, a fire, and a killer bee swarm—revealed serious gaps in the preparedness of Crooked Creek Middle School’s teachers, staff, and study body. Thaddeus hopes his defense will show his good intentions and that he’ll be permitted to rejoin regular classes.

Thaddeus is organized and gathers all the relevant information for his defense in a separate case file for each incident. The files include

• Thaddeus’s explanation of what really happened

• correspondence with his lawyer uncle, his Boy Scout Troop Leader, the principal, a classmate, and the Citrus League of America

• informative (and hilarious) illustrations and diagrams

• several original blues songs, because when you’re down so long you naturally get the blues.

Thaddeus’s self-proclaimed expertise on every subject imagineable and his total lack of self-awareness are something to behold. I guarantee this book will make you laugh. By the end, you’ll learn the deeper motivation behind Thaddeus’s incessant helpfulness and you can decide if you agree with the principal’s final ruling about Thaddeus’s punishment.

A guarantee is an ironclad promise. It is often accompanied by an expectation of compensation if the promise is not kept. For example: I guarantee THE DEFENSE OF THADDEUS A. LEDBETTER will make you laugh or I’ll take you to Calvin’s Donut Shop for the donut de jour—my treat.

This looks like a fun read. Thanks for posting.

Thaddeus is such a likeable character, and I don't think you'll have to buy any donuts--there's no way anyone could read this book without laughing!

I'm intrigued. I'm putting this one on the to-read list for when my older son is a little older.

AISB, This is definitely a fun book. And it has depth, too. Thaddeus’s hilarious actions are motivated by…well, I don’t want to be a blurter-outer like Penny. You can read for yourself to find out why Thaddeus does the things he does.

Krystel, I agree. I don’t think I’m in much danger of having to buy anybody donuts. (Side note: Normally I encourage the eating of donuts for every occasion, but eating anything solid while reading a funny book can be a choking hazard.)

LitLass, If the future version of your older son were able to, he’d send you a message through time to thank you. And also to ask where his jacket is.