A Book Review by
Violet the Telekinetic Puppy 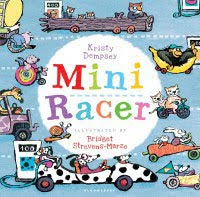 MINI RACER is a picture book about a race between lots of animals. Some animals race alone and those animals are a seal and a bear and a mouse and a bulldog and a giraffe and a monkey and a snail. Morzant will like this book because he likes snails. I don’t know why he likes snails but he does.

The racers want to go, go, go but you need to stop and look, look, look at all the pages because there are lots of things happening on every page and you will want to look at all the things happening because it is fun. You will see spotted dogs in a spotted car and a rabbit getting a band-aid after crashing and bees following the bear’s bee hive vehicle and the cats riding their bike on telephone wires and the mouse eating his cheese wedge car.

Readers who think a car makes a good snack.

Dear Violet,
Violet is my favorite color and this is now my very favorite review. Thank you for having such sharp eyes.
Bridget
ps I like snails too.

Hi Jeanne,
Thank you for coming to our blog. I am glad Bigfoot is real too because this blog was his idea and I like to write reviews for it. And also Bigfoot is really nice. Good-bye.

Sounds like such a fun book. I'm going to look for it in my library. Reminds me P.D. Eastman's a of Go, Dog Go!

Hi Mouseprints, Your girls will like this book a lot because it is so good. I’ve never ridden on a scooter before but I’ve chased one and the scooter rider was going really fast and I almost got him but then I didn’t.

Hi Catherine, I hope your library has this book because it is so good and you will like it a lot. GO, DOG. GO! is so good too. I love the dog party at the end. I would like to go to a party like that someday.

I think my 5-year-old would love this book. I must get it.

I've now discovered Bigfoot - thanks to Bridget - and you're wonderful. Great review for a great book. I look forward to reading more.
Cheers!

Hi Jane, You are wonderful, too and I know that you are wonderful because I can tell from your message and also I asked Briar the Psychic Beagle. Good-bye.

Another fun review- thanks for posting to book talk Tuesday! When I read your review, I felt like I was watching that old FedEx Commercial where the guy talks super fast?
http://youtu.be/31yxkSIIn9A
Yes, this one. You should do a video review of this and do it just like this commercial!
: ) Kelly

Just discovered your fantastic site - I've had a such a good laugh reading your review, if I wasn't already a Bridget fan, your review would have done it. X0X0 Sue Porter