Super Creepy Reading Extravaganza A la Mode
You haven’t heard much from me on this blog. What business is it of yours what I read? What business is it of mine what you read? But it seems the only way to get Penny off my back about her S.C.R.E.A.M. project is to post a Halloween reading list. So let’s just get on with it already.
I’ve decided to use my list to educate you about different types of ghosts. Halloween without ghosts is like April Fool’s Day without pranks—you wouldn’t be as jumpy, but then what’s the point?
Ghost Type A: Crabby
Some ghosts are sad, some are mischievous, and some ghosts are just plain ticked off. Being half-invisible and irritable, I’m only an encounter with a hungry crocodile away from being a crabby ghost myself.
THE BAKE SHOP GHOST
by Jacqueline K. Ogburn,
illustrated by Marjorie Priceman
[PICTURE BOOK]
Houghton Mifflin, 2005 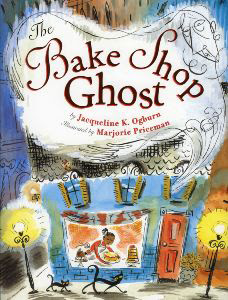 Miss Cora Lee Merriweather has a reputation for being a bit of a crank, but people don’t care about that as long as she’s baking her famous cakes. Then she dies. Do people miss her? No, they do not. Do they miss her cakes? Yes, they do, the selfish ingrates. Other bakers try to move into Cora Lee’s shop. The ghost of Cora Lee scares them all away, except for Annie Washington who’s determined to stay no matter how much trouble Cora Lee causes her. Cora Lee makes a deal with Annie: If Annie bakes a cake good enough to make Cora Lee cry, then Cora Lee will stop haunting the shop. It takes awhile for Annie to figure out the right cake to make, but when she does, Cora Lee isn’t such a crabby ghost any more. Do you want me to tell you what kind of cake Annie makes for Cora Lee? Nice try. Read the book yourself. If you’ve got the notion that maybe I’d be less crabby if somebody made the same kind of cake for me, I’ll tell you that Penny did last week. Do I seem less crabby to you?
You probably noticed Cora Lee isn’t a scary ghost. And the illustrations in this book aren’t grim or creepy in the least. They’re full of cheerful baked goods and bright colors and even a happy yellow cat. If dark and morbid is more your thing, I’ve got a recommendation just for you.
Ghost Type B: Victim of Foul Play
THE SPIDER AND THE FLY
by Mary Howitt, illustrated by Tony DiTerlizzi
[PICTURE BOOK]
Simon & Schuster, 2002 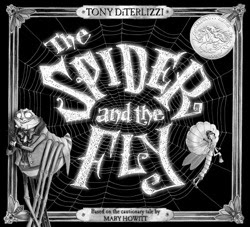 The ghosts in this book didn’t die of natural causes like Cora Lee did. They were the victims of foul play. The ghosts aren’t part of the original story, which is a classic poem by Mary Howitt who died over 120 years ago, and who may be a ghost herself for all I know. The gist of the poem is that a spider tries to lure a fly into his web and eventually succeeds by telling her how pretty she is. It’s supposed to be a lesson about being leery of anybody who tells you only what you want to hear. The illustrator added his own story that plays out as a couple of ghosts of the spider’s victims trying to warn away the fly. Unlike the illustrations in THE BAKE SHOP GHOST, these are dark and morbid from the start, when the eight-legged fiend greets the dainty fly, to the end when the fly is bound tight in the spider’s web along with other bugs’ corpses, the shadow of the spider with a knife and fork in hand looming.
You’re looking a little pale there, so it’s probably time to introduce you to the next type of ghost.
Ghost Type C: Friendly
JOHNNY BOO: THE BEST LITTLE GHOST IN THE WORLD
by James Kochalka
[COMIC FOR VERY YOUNG READERS]
Top Shelf, 2008 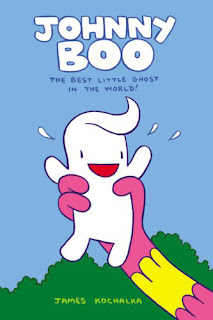 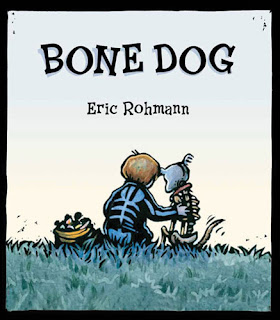 Bigfoot has a policy on this blog against books that have a dog who dies. To that I say, tough. I love this book and I’m going to tell you about it.
Ella, the dog, dies at the beginning, but before she does she tells her boy, Gus, that she will never leave him. On Halloween Gus gets into trouble with some skeletons out from their graves. They think he’s one of them because he’s dressed as a skeleton. When they realize Gus is a living person, they plan to eat him. Ella has never left Gus, though, and she appears in time to help him. Together they summon all their bone-loving dog friends who chase the skeletons away. This book is sad and a little scary (because of the skeletons, not because of the ghost dog) and funny. Mainly it’s a touching story about eternal love and devotion. Did I cry when I read this? What’s it to you?
I’ll wrap this up with the kind of ghost that’s likely to give you chills.
Ghost Type E: Combo
THE GIRL BEHIND THE GLASS
by Jane Kelley
[MIDDLE GRADE]
Random House, 2011 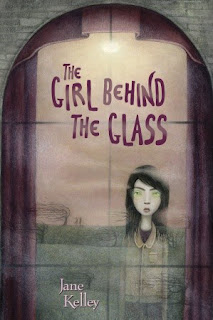 Cora Lee stuck around after she died to keep baking. The spider’s victims stayed to warn future bugs to beware, although they didn’t do a very good job. Ella stayed with Gus because she promised she would and because she loved him. Anger is what keeps the ghost in this book from moving on. She’s also lonely and confused. When a family moves into the house she’s been trapped in for eighty years, she takes a special interest in the eleven-year-old twin girls, Hannah and Anna. Hannah, the lonelier of the two, is more receptive to the ghost and can eventually hear her when nobody else can. The ghost is happy to finally have a friend and there’s only one way she can think of to keep Hannah with her forever. What makes this book especially fun to read is that the ghost is the narrator. She can read minds, so she knows everybody’s thoughts. Best of all is how she gradually divvies out clues about how she became a ghost and why she’s angry. Not knowing right away what terrible thing happened in the closet or what “ildred” means or what’s hidden in the attic builds tension. As you read you get nervous about the ghost’s intentions. In the end it turns out that not even the ghost knows the whole story of her death. That’s all I’m going to tell you, otherwise I’ll ruin the story for you. Besides, I’m busy.
You probably won’t be hearing from me again until the next time Penny pesters me to death. Then I’ll come back as a Type A ghost and make her sorry she didn’t leave me alone.
Happy Halloween and all that pumpkin rot.
at 2:28 PM

Super scary list, Bigfoot. Puttin’ my shoe on to go to the library. My other shoe is headin’ to the book store.

Love the sound of these! I'm right behind Mirka!

Wow! That's a great list of books. I'll have to check them out!

Great list. I've read Johnny Boo and Bone Dog but not the others. I'll have to check them out. Happy Halloween!

Great post about ghosts according to their type! Fun idea and some great reads there, too.

Beverly asked me to respond to these comments. Total disclosure…I asked her to, she yelled at me, and now I’m doing it for her.

Kelly and Mirka, Hope you found what you were looking for. I wonder which are more likely to be haunted, libraries or bookstores?

C.R. Beverly did come up with a great list. I scare easily, but there are some books there even I would read.

Catherine, Beverly broke my rule about recommending a book that has a dog die. I’d have a talk with her about that if I were in the mood to get yelled at again. I’m not.

AISB, Thanks for the comment. I told Beverly what you wrote and she actually smiled. That’s more rare than spotting a ghost!