QUEEN OF THE FALLS (Picture Book) 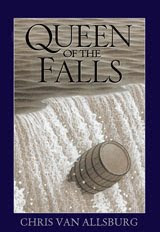 Zulko, humans. Those of you who have kept abreast of my studies of Earth literature know that I frequently experience difficulty in determining which stories are based in reality and which are an imaginative author’s invention. For example, I once thought a certain novel about zombies was a work of non-fiction. Bigfoot set me straight in that case, declaring that zombies, unlike sea creatures and telepathic puppies, do not exist on this planet; however, I often find that my limited knowledge of Earth, its inhabitants, and its customs leaves me ill-equipped to differentiate between fact and fiction. This poses a significant problem in that many of my Earth friends, particularly Norman the Half-Invisible Turtle, delight in testing my gullibility. Taking those factors into account, I was understandably skeptical when Norman claimed that QUEEN OF THE FALLS is a work of non-fiction.
QUEEN OF THE FALLS is about a human woman in her sixth decade of life who decides to encase herself in a wooden barrel and launch herself over the Niagara Falls, a fearsome torrent of continuously plummeting water located on Earth’s North American continent. Distrusting Norman has become almost a reflexive behavior for me, but were the most trustworthy librarian to have handed me this book directly from its perch on a shelf in the non-fiction section, I would have been every bit as doubtful as to this book’s non-fiction classification. Risking one’s life to perform a dangerous stunt for the sole purpose of gaining celebrity and wealth defies logic. One cannot enjoy either celebrity or wealth when one is dead, at least as far as current scientific knowledge suggests.
The author’s skill in writing this book is as remarkable to me as is the subject matter. Despite my misgivings towards the act of riding a barrel over the Niagara Falls, the author made me understand what motivated Annie Edson Taylor to attempt such an act. In fact, so skillful is the author in his use of not only words, but of illustrations, that I found myself cheering on Annie Edson Taylor as she struggled to achieve her absurd and perilous goal. I grew anxious as the moment of her attempt approached and I was as tense as the spectators to the actual event must have been.
Long ago Bigfoot branded Penny C. Monster a “blurter-outer” for her tendency to give away the endings of books and movies to those who have yet to experience them. I’ve come to recognize that “blurter-outer” is a title with negative connotations. I don’t wish to receive similar ridicule, nor do I want to diminish your enjoyment of this book by revealing the fate of this unusual, determined woman. I’ll leave you to discover that on your own.
It occurs to me now that perhaps my initial reaction in doubting the veracity of this story isn’t merely a product of my ignorance of Earth intricacies; perhaps Earth readers will be as stunned as I was to learn that, while there may be no such creatures as zombies, there indeed existed a woman who rode in a barrel over the Niagara Falls. Earth readers may also be as surprised as I was to learn in the author’s addendum that Annie Edson Taylor may have been the first, but she was not the last.
Good-bye for now, humans.
Notes Regarding Future Studies into Earth Literature:
• The author of this book is also its illustrator—explore possible external influences that may contribute to a creative writer’s illustrative abilities such as significant early exposure to pencil shavings/grape jam/acid rain/cat dander/igneous rocks/periwinkle-colored crayons.
at 5:49 PM

Can't wait to get my hands on this one - I'm a huge Van Allsburg fan. It's already in my Follett shipment, so I love reading more good reviews of it. Thanks, S

Yes, Chris Van Allsburg is a remarkable human. I’m keen to learn what factors contributed to his ability to write AND draw well. Alas, I can do neither.