THE ONE AND ONLY IVAN (Middle Grade)

by Katherine Applegate, with illustrations by Patricia Castelao 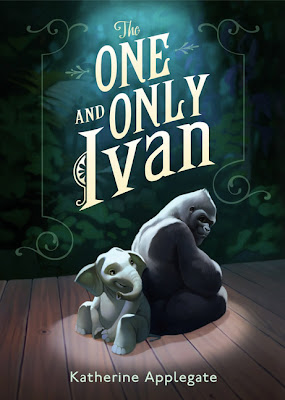 Imagine you’re forced to live in the same small room for twenty-seven years. There’s pretty much nothing to do. People walk by once in awhile to gawk at you. There’s not much to inspire the paintings you like to make. When you do paint, your paintings are sold in a gift shop—not because anybody thinks they’re great works of art, but because they were painted by a gorilla.

Did I mention you’re a gorilla in this scenario? No? Well, you are. You’re a silverback gorilla.

The gorilla in this story, Ivan, doesn’t act much like a gorilla. It’s not his fault. He was taken from the jungle when he was young and then raised by humans. He doesn’t like to remember his jungle times. It’s sad thinking about what the humans who took him did to his family all those years ago. Ivan lives in the now. His “now” is a familiar kind of dreary that he accepts as the way his life will always be.

If that’s all there was to Ivan’s story, THE ONE AND ONLY IVAN would be a dreary and uneventful book, so you can probably guess that something happens to shake up his world. Judging by the cover, you can probably even guess that a baby elephant is involved somehow. (You’re right, but in the future try to avoid judging a book by its cover. It’s bad form.)

There’s a new baby elephant in the cage next to him who asks Ivan to tell her stories. He starts to tell her about his past and to remember all he lost when he was taken from the jungle. His memories get him wanting more out of life for himself. Mostly he worries about the baby elephant. He doesn’t want her to live a dreary life being forced to perform tricks for humans. Trying to get her into a better environment brings purpose to his life, and his art. His mission helps him rediscover what it means to be a gorilla.

Ivan’s gorilla way of looking at the world gives readers a lot to think about. Ivan has a special way of telling his story, too. He thinks humans use too many words, so he’s a get-to-the-point narrator. Most of the chapters are only a page or two long. Many are barely half a page. Just because the chapters are short doesn’t mean Ivan doesn’t have a powerful story to tell.

Come to think of it, Ivan would probably think I’m too wordy. Let me try to write a more gorilla-friendly review:

THE ONE AND ONLY IVAN is a triumphant story about a likable guy who uses his rediscovered gorilla wiles to save himself and a baby elephant.

That’s still too wordy. How about this:

THE ONE AND ONLY IVAN is a good book. You should read it.

There. Short and to the point. Very gorilla. Just remember, I’m not actually a gorilla.

Here are some ways you can tell I’m not a gorilla:

• I can’t be photographed clearly. A gorilla can.

• I have bigger feet. Obviously.

• I never use my knuckles for walking. What do you think these big feet are for?

• If I were stranded on a deserted island with nothing else to eat, I’d eat a banana. But only then.

• If I’m being honest, I’m probably not as good-looking as the average gorilla.

• I can read. I’m not saying I’m smarter than a gorilla. I’m just saying.

One last thing. The author of this book was inspired by a real-life gorilla named Ivan. Maybe I’ll visit him someday. I’m curious if I could beat him in an arm wrestling match.

What a fun review. Sounds like a great book.

Great review! I'm now putting this on my TBR list, since it has your thumbs up.

Thank you both for stopping by. You’re going to enjoy this book. I definitely give it two thumbs up.

By the way, thumbs aren’t a way you could tell me apart from a gorilla. We both have them. But, unlike a gorilla’s, my big feet don’t have opposable toes. Pity. That could come in handy. I mean footy.

AWESOME review! You have quite a flair with words. :)

Thank you, Katrina. I also play a mean game of cribbage.