The Second Meeting of the Cryptid Book Club 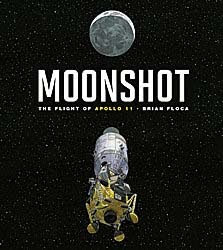 Date: Monday, September 27, 2010
Location: Undisclosed
Members substantially present:
Bigfoot, Morzant, Briar, Beverly, Norman, Oliver, Lenny, Violet
Member virtually present via video conferencing:
Penny C. Monster
Members absent:
None
Meetings minutes taken by:
Penny C. Monster
Snack Master:
Norman
Book (selected by Morzant):
MOONSHOT: THE FLIGHT OF APOLLO 11 by Brian Floca
(Atheneum-Simon & Schuster, 2009)
Proceedings:
• Meeting called to order by Bigfoot at 9:00 a.m.
• Refreshments taken. This week’s Snack Master, Norman, brought gummy worms. Bigfoot refrained from commenting on how much he likes donuts. Morzant tried to share the results of his latest experiments on the tensile properties of Rice Krispies Treats. Briar distracted him by calling his attention to the tensile properties of the gummy worms. Morzant expressed fascination in the tensile properties of gummy worms and suggested the meeting time be used to study those properties. Briar reminded Morzant that he was the one who picked the book to discuss. Morzant still insisted on a vote being taken to use the meeting to study the tensile properties of gummy worms rather than to discuss MOONSHOT: THE FLIGHT OF APOLLO 11. The result of the vote was 7 to 2 against studying the tensile properties of gummy worms. (Violet voted with Morzant so he wouldn’t feel lonely.)
• Book club members took their seats at the meeting table, checking first that Bigfoot did not bring his whoopee cushions again. He did not.
• Previous meeting minutes reviewed: Beverly brought Rice Krispies Treats. Morzant demanded a vote to use the meeting to study the tensile properties of the Rice Krispies Treats rather than to discuss the book. The attendees voted 5 to 1 against the motion. An attempt was made to discuss KEEPER by Kathi Appelt (selected by Beverly). Morzant hijacked the meeting with endless questions about which of many creatures are real and which are fictitious. Bigfoot provided dubious answers. Bigfoot issued a moratorium on Rice Krispies Treats at future meetings.
• There appeared to be something wrong with the video conferencing equipment. The substantially present members continued talking, but the virtually present member (me) could not hear them. I waved, splashed, and screamed to get their attention so they would know I couldn’t hear them. This went on for a long time before the substantially present book club members burst out with audible laughter and congratulations for Bigfoot on his clever practical joke at my expense.
• Morzant then began the book discussion by explaining that he selected the picture book MOONSHOT: THE FLIGHT OF APOLLO 11 to help “avoid the possibility for tangental discussions” such as occurred in the last meeting. He explained that by choosing a book with a “delightfully absurb premise—that of humans landing on the Earth’s moon” there would be no need for him to monopolize the meeting with endless questions about what was real and what was not real since “the whole book is unmistakably fiction." Beverly said, “I’m out of here,” and excused herself from the meeting.
Here’s a partial transcript of the ensuing exchange:
BIGFOOT: MOONSHOT is non-fiction. Neil Armstrong, Buzz Aldrin, and Michael Collins all went to the moon. Armstrong and Aldrin actually walked on the moon.
BRIAR: It’s true, Morzant.
MORZANT: I see what’s happening here. During the last book club meeting you all got me to believe in leprechauns and grizzly bears. Now you’re trying to convince the gullible alien from another planet that humans have been to the moon. Admirable effort, but ultimately unsuccessful. While a Chupacabra has a ring of truth to it, not so a human lunar landing. Now to continue the book discussion, I'd like to commend the author for his deft crafting of plot and skillfully rendered illustrations, all of which made it easy for me to suspend my disbelief and go along with notion of humans in space. I found this book highly entertaining in its fantasticalogicalness.
BRIAR: That's not a real word, Morzant.
MORZANT: I know. The whismy of the book is making me feel quite silly.
PENNY: Honestly. This book is based on real events. Three American astronauts went to the moon in July of 1969. Two of those astronauts landed on it.
NORMAN: And there’s proof. What’s left of the cheese platter they brought back is on display at the National Air and Space Museum in Washington, D.C. They let visitors sample from it if they bring their own crackers.
BRIAR: You're not helping, Norman.
BIGFOOT: And this was only the first lunar landing. Twelve humans have walked on the moon.
MORZANT: Making the story more fantastical is not making it more believable, I assure you.
BIGFOOT: I promise, we’re not pulling your leg. Except for the part about the cheese.
• While Morzant worked his way through the seven stages of skepticism, the rest of the group talked about the book:

Bigfoot appreciated how informative the book was without being overly technical.
Briar agreed. She was impressed with the author’s use of poetic language throughout to make readers feel the power of the rocket that launched Apollo 11, the vastness of space, the moon’s desolation, the isolation of the astronauts during the mission, and the world's shared pride in the Apollo 11 mission. She especially loved how the words and the illustrations worked together to build tension and suspense for an event that most readers, psychics and non-psychics alike, already knew the outcome of. Even though she knew in advance that the astronauts had landed on the moon and safely returned home, there were moments while reading the book when she felt afraid for the men who were so far away from Earth that they could not be rescued if anything were to go wrong.
Violet commented on the drawings. She really liked the one where a sandwich and a tube of toothpaste are floating in the ship. She thought this showed that the astronauts were telekinetic, like her, and that she would probably make a good astronaut because “it’s easy to make a tube of toothpaste float.” Morzant, who seemed to have finally completed the seventh stage of skepticism (acceptance), interrupted Violet to explain gravity to her. Briar diffused what threatened to become a lengthy lecture on gravity by offering Morzant more gummy worms.
Lenny said he thought he'd make a good astronaut, too, since he can already do somersaults in the air. He likes the idea of going so high above Earth and reaching the moon. Bigfoot reminded Lenny that he’s only allowed to levitate as high as the pine tree with the branch that looks like a tuning fork. Morzant explained that if Lenny levitated as high as the moon he’d need a special suit like the astronauts in the book used. Briar diffused what threatened to become a lengthy lecture on atmosphere, vacuums, and radiation by mentioning to Morzant that gummy foods also come bear-shaped. Lenny speculated on where he might get a space suit. He considered contacting Binky (of BINKY THE SPACE CAT and BINKY TO THE RESCUE by Ashley Spires). Norman reminded Lenny that Binky is just a character in a book, at which point Morzant regressed to the third stage of skepticism (bargaining) and yelled, “Ah, ha! If Binky is fictional, then somebody named Buzz must also be fictional!”
Oliver’s favorite part of the book was when the astronauts saw Earth from the moon and when the author said the astronauts were looking at everybody on the planet all at once. Oliver liked imagining that. He also liked the drawings showing what a family on Earth was doing during the moon landing. They were listening and waiting and worrying along with the rest of the world. Then when the astronauts announced they were on the moon, everybody was happy. Even without telepathy, the world shared this big happening all together.
I shared my family’s story about the lunar landing. At family reunions, my great uncle Bill used to tell us about how he was swimming nearby when the astronauts' ship returned to Earth and landed in the Pacific Ocean. He played truth or dare with the astronauts while they waited for a helicopter to come pick them up. Great Uncle Bill dared Neil Armstrong to moon the helicopter pilot. No matter how much we would beg, he would never tell us if Neil Armstrong did it.
Norman liked the book, too, but said that he wished the author had written about the cheese collection process and the lunar lemurs who helped the astronauts plant the American flag by digging a hole for the pole. This prompted the following exchange:
MORZANT: I was on the Earth's moon before and I never saw any lunar lemurs.
NORMAN: Sadly, they became extinct shortly after the first lunar landing. Buzz Aldrin's cold sore virus wiped them out.
BRIAR: Norman, you're really, really, really not helping.

Wrap up:
• Briar was assigned to be Snack Master for next meeting.
• Penny is to pick the next book.
• As Club President, Bigfoot issued a moratorium on gummy worms, gummy bears, and any other gummy derivation.
• Meeting adjourned at 10:20 a.m.
at 5:45 AM