ReRunday: LEMONADE, AND OTHER POEMS SQUEEZED FROM A SINGLE WORD (Poetry)

Originally posted on May 24, 2011.
~
LEMONADE, AND OTHER POEMS SQUEEZED FROM A SINGLE WORD (Poetry)
by Bob Raczka, illustrated by Nancy Doniger
Roaring Brook, 2011
Tuesdays with Morzant:
A Book Review by Morzant the Alien
(An Extraterrestrial Attempts to Write Earth-Style Poetry) 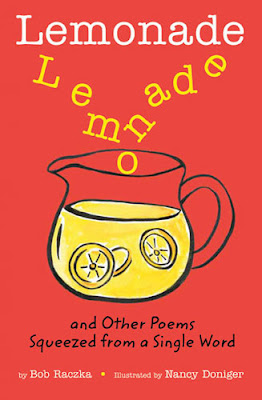 Since I began my studies of Earth literature several authors have encouraged me to attempt writing creatively. Unlike Earth literature, virtually all Zeentonian literature is based on mathematical equations. I pride myself on my mathematical abilities; however, even on my home planet I never attempted a creative endeavor such as writing a novel. For that reason, and because I feel my studies of Earth literature are in their infancy, the notion of writing any style of novel overwhelms me. Still, it’s impossible to ignore the impact experimentation with creative writing would have on my studies of Earth literature. Furthermore, the question of whether a Zeentonian can write creatively without employing differential equations or axiomatic geometry has gripped my curiosity.
A scientist devises small-scale experiments to understand larger, more universal trends. If I apply the same methodology to determining my aptitude for creative writing, I find I needn’t write a novel, or even a short story. Poetry is the ideal medium for my purposes. In addition to being a scaled-down creative writing format relative to a novel, poetry encompasses a wide range of forms, both structured and uncontrolled. These diverse forms offer a wide range of experiment possibilities.
I have determined that trying to write poems in the unusual poetry form presented in LEMONADE, AND OTHER POEMS SQUEEZED FROM A SINGLE WORD will be an appropriate initiation to this offshoot of my studies of Earth literature. The book is comprised of poems that are comprised of words that are comprised solely of the letters contained in the original word. The resulting combination of words illuminates the original word in an imaginative way. The form’s restrictive format appeals to my appreciation for rules and its strict limitations will narrow my creative focus to help reduce the likelihood of my becoming inundated with divergent ideas.
Experiment 808.1: Am I a Poet and I Just Don’t Know It?
Date: May 24, 2011
Subject: Morzant the Alien
(experiment preparation, execution, and report by Morzant)
Attempt #1: Selected a favorite word.
research
Resultant Poetic Configuration:
see
hear
share
Notes:
As required, I restricted myself to the use of letters within “research.” The three words do relate to the selected word, but does this arrangement of three words qualify as a poem? This arrangement lacks concrete imagery. Were the talented artist of LEMONADE, AND OTHER POEMS SQUEEZED FROM A SINGLE WORD called upon to provide a lively and expressive illustration for this “poem” such as the ones she created for LEMONADE, I believe she would be hard-pressed to settle on a specific graphic representation.
Attempt #2: Selected another word.
literature
Resultant Poetic Configuration:
a
rare
tale
a
real
treat
Notes:
Perhaps a more successful attempt, but it still exudes a certain vagueness. When I read it, I don’t feel the sense of wonder and wholeness I experience when reading Bob Raczka’s poems.
Attempt #3: Considered the possibility that I’m overthinking the process. Looked out the window and selected the word that represents what I first saw.
dandelions
Resultant Poetic Configuration:
“lions
dine
on
snails,”
said
a
seal.
Notes:
What does that even mean? Am I allowed to add punctuation? This is more difficult than I imagined.
Threw pencil across the lab in frustration. Woke Mortimer from his nap. Sent him to make me a potentially inspirational pumpernickel smoothie.
Attempt #4: Tried again after ingesting a delicious pumpernickel smoothie.
asteroid
Resultant Poetic Configuration:
stare
at
it
it
is
a
disaster
to
ed
Notes:
Pumpernickel smoothies do not provide significant creative writing impetus. They are, however, quite delicious.
Attempt #5: Programmed computer to produce a poem using a classic Zeentonian literary equation.
pistachio
Resultant Poetic Configuration:
acho
a
cat
is
hip
oh
i
sit
Notes:
Initial studies suggest Zeentonian literary equations are not an effective means for producing this type of poetry.
Attempt #6: Selected the name of a friend.
Bigfoot
Resultant Poetic Configuration:
boot
too
big
Notes:
Perhaps sufficient if Bigfoot wore boots. He does not.
Attempt #7: Considered that I needed more letters with which to work and selected the name of another friend.
Norman the Half-Invisible Turtle
Resultant Poetic Configuration:
Norman
is
not
a
fable
Norman
is
a
teaser
Notes:
I believe this result reflects the spirit of the exercise; however, I arrived at it using dubious means. This result must be disqualified from the experiment.
Attempt #8: Selected a Zeentionian word.
chimstourgney
Resultant Poetic Configuration:
hungry
it
comes
I
run
Notes:
I’m actually quite pleased with this result, but it’s meaning will not resonate with Earth readers unfamiliar with the vicious, fleet-footed chimstourgney. Regretably, this result cannot not be used to support the supposition that an extraterrestrial can write creatively in a style commensurate with Earth writers.
Conclusion: If I’m a poet, I still don’t know it. Further experimentation necessary.
Auxiliary Conclusion: Bob Raczka is a talented poet.
Notes Regarding Future Poetry Experimentation:
• Try a poetry format with less rigid rules.
• Write in a different location than the lab—is there a connection between successful creative writing and location?
• Find out what type of smoothie, if any, Bob Raczka drinks while writing.
at 8:02 AM