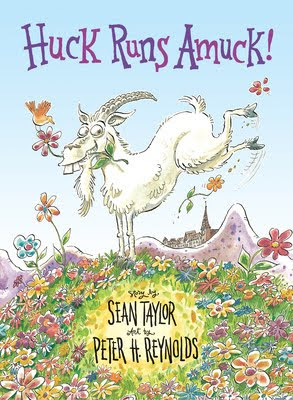 Huck is a special type of goat and that type of goat is a mountain goat. That means Huck is good at climbing. It’s good that Huck is good at climbing because the other thing about Huck is that his favorite food is flowers and the flowers Huck wants to eat are all in high-up places. Huck is a good climber but when he sees flowers he gets excited and he goes amuck and then he isn’t a careful climber.

Huck does a lot of climbing in this book but he doesn’t do a lot of eating because every time he gets close to flowers something happens to keep him from eating the flowers. One time he gets close enough to eat some flowers when he climbs way up a tall cliff that has flowers on top of it. But Huck doesn’t get to eat those flowers because he falls off the tall cliff and that might sound sad but it is really funny because the picture of him falling off the tall cliff is so funny that you won’t be sad. And Huck doesn’t get sad either because right away he sees some more flowers to try to eat and that is another funny part because the flowers he sees aren’t the kind of flowers that grow in the ground they are the kind that are just pictures on underwear. Huck climbs a clothesline to get to the flowers that are really just pictures on underwear but a funny thing happens to keep him from eating the underwear flowers. I won’t tell you what the funny thing is because you will want to find out for yourself.

There are other funny parts where Huck gets close to flowers but doesn’t get to eat them. But there is one time he does get close to flowers and he could eat them if he wants and those are the flowers on a lady’s hat and the hat is on top of a church tower and Huck climbs the tower to get to the hat. But do you know what? Huck doesn’t eat the hat flowers because everybody in town thinks Huck is being a nice mountain goat and that he is climbing the church tower to get the lady’s hat for her. Even though he really wants to eat the hat flowers he doesn’t because he doesn’t want everybody to be mad at him and also because even though he is a hungry mountain goat he is also a nice mountain goat and so he doesn’t eat the hat flowers. The lady is happy and wants to give Huck a reward and you probably think you know what his reward is but if your guess is flowers you are only sort of right. If you think I’m going to tell you if Huck gets to eat flowers at the end of this book you are not even a little bit right.