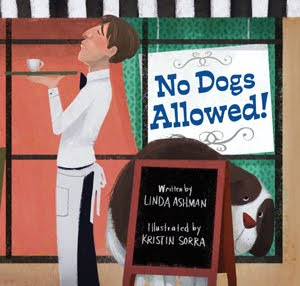 When I saw this book, I thought I wasn’t supposed to read it because the cover says: NO DOGS ALLOWED! That hurt my feelings. Then it made me mad. I like the dog on the cover and I wanted to know that dog’s story.

I read this book even though the cover told me not to. Nobody yelled at me. I found out that NO DOGS ALLOWED! isn’t a warning for dogs not to read this book. It’s the book’s title.

NO DOGS ALLOWED! is about a man named Alberto who doesn’t want animals to come to his restaurant. He has tables set up on the sidewalk outside his restaurant. He has a chalkboard sign next to the tables. On it is the word “WELCOME!” When Alberto sees a boy and a dog coming near, he changes the sign. The new words he writes are “NO DOGS ALLOWED.” The boy and the dog don’t ignore the no dogs allowed sign like I sometimes do. They cross the street to sit by a fountain.

Next Alberto sees a girl and a cat coming. He changes the words on the sign again. This time he writes NO DOGS OR CATS ALLOWED. The girl and the cat join the boy and the dog at the fountain.

Alberto has to keep changing his sign because every person that comes by has a different kind of animal with them. Soon there are a lot of people and all different types of animals having fun together around the fountain. A woman with an ice cream and lemonade stand gets all their business while Alberto is all alone on the other side of the street. Because he didn’t welcome the animals he isn’t selling any food. Everybody except Alberto is having a good time until the ice cream and lemonade stand runs out of goodies. That’s when the boy and the dog try to convince Alberto to change his sign one more time. You can read this book yourself to see if Alberto agrees.

My favorite part of this book is looking at all the different people and animals who show up. A penguin rides in a kangaroo’s pouch. A girl hula hoops with a bunny. A hippopotamus sips lemonade from a straw in a glass held by a bird. Even with just a few words, this is a book that can be read over and over whether you are a dog like me, a person, a cat, or an iguana. Everybody is allowed to read this book.

I looked this up at my library online and added it to our list after reading this review. I'm hoping it's easy enough for my six-year-old to read. I look forward to it. Thanks!

Oliver is spot-on, and surely not for the first time.
Oliver- I recommend your recommendation.

Thank you for telling us about this book, Oliver. What a clever dog you are, and it looks like you have great taste in picture books.

E.R. Your six-year-old will be able to read it. I’m only one.

Mirka, It's true. I do have spots. Have we met before?

Anne, I don’t taste picture books. Lenny sometimes chews them up, but I promise I don’t.

Thank you for telling me about your review, Oliver. I really appreciate it. I'm sorry the cover upset you initially, but I'm so pleased that it didn't keep you from reading the book. And as far as I'm concerned, dogs should be welcome everywhere -- mine certainly think so (though, honestly, they don't always behave themselves)!

Oliver, I am glad you read this and then shared it with us. I must say, I love the cover and everything you said about the book! Will be checking it out, that is for sure.

I've seen this book in the book store but for some reason never opened it up. Maybe I, like you, thought the cover was not very inclusive! I'm glad you figured out it was only a title and you could read it, though. This is a great review. Next time I see the book, I am going to be sure to open it!

Linda, I like you. I bet your dog friends are nice, too.

Deb, I like the cover a lot now that I know I’m allowed to read this book. I like how the big dog is hiding behind the sign even though the sign isn’t big enough for him to hide behind. That’s funny.

Kerry, You will be happy when you read this book. Pretend the cover says “Kerry Allowed!”

Thank you Jen for visiting our blog and for liking it and for leaving a comment. You are nice. If you come back again another day I will tell you about more good books that you will like. Good-bye.

Jen, Violet got excited and forgot this is my post. If what I wrote makes you want to read this book, that makes me happy. I’ll share another good book on another day. Violet picks out good books, too.