WHAT IS YOUR DOG DOING? (Picture Book) 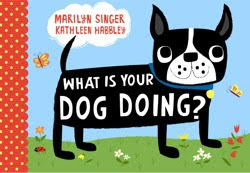 I’m Violet and I’m a dog and the thing that I am doing is telling you about the picture book WHAT IS YOUR DOG DOING? This book does not have a story with a beginning and a middle and an end. It has lots of little stories about what dogs are doing. On one page a dog is doing a thing and on the next page another dog is doing another thing and there are words that that describe what the first dog is doing and those words rhyme with the words that describe what the second dog is doing. And then you turn the page and see more dogs doing more things.

The pictures are bright and colorful and have lots of details that are fun to look at. One of my favorite pictures is the dog who is hiding behind a curtain but he is not a very good hider because his nose and his wagging tail are sticking out. My other favorite picture is actually two pictures because it is a big picture that takes up two pages and it is the waiting room at a veterinarian’s office. You might think I wouldn’t like to see a veterinarian’s office and usually I wouldn’t because I don’t like to get shots or to have my ears pulled but I like the waiting room at the veterinarian’s office in this book because there are lots of funny details in the drawings like the magazine that has articles for dogs about how to beg and there is also a picture of a Saint Bernard sitting on his person’s lap only you can hardly see the person because the Saint Bernard is so big and that is funny.

The thing that you should be doing right now is reading this book.

The thing that I am doing now is saying “good-bye.” Good-bye.

I hope there is a photo of a dog howling everytime the firetrucks down the street leave on a mission!

I'm a dog lover and cupcake eater so I'm definitely finding and reading this book. :)

I am sorry Anne but none of the dogs in this book are howling at firetrucks going down the street even though that is a fun thing for dogs to do. I also like to howl at squirrels up in trees and harmonicas and rabbits down in holes and people who are wearing hats. Good-bye.

Hi Jennifer, Thank you for liking my post. You will like this book when you read it. If you check it out from the library be careful not to get pink cupcake frosting on the pages because librarians get mad when books come back with sticky pages. But if you accidentally make the pages sticky you can ask your dog to lick the pages clean because dogs like to help clean up pink cupcake frosting messes. Good-bye.

Hi C.R. I like the little face you made at the end of your comment and I think it would look like me if you could add floppy ears. Good-bye.

Sounds like a great book. I'm putting it on my TBR list. And my dog right now is pacing downstairs, waiting for this morning walk. Better get going!