Why do they make kids go to school on Halloween? You should have the day off like I do. I don’t have to go to school on Halloween. Or Valentine’s Day. Or Arbor Day. Or any day. I’m a turtle. I already know everything there is to know. So, while you’re struggling to keep your eyes open during social studies or trying to shrink down in your chair so the teacher doesn’t call you to the board to work that math problem, I’m putting the final touches on my costume. Not to rub it in. (By the way, if you were a turtle, it’d be easier for you to avoid being called on in class. You’d just hide in your shell. Of course if you were a turtle, you’d already know everything there is to know and wouldn’t be in class in the first place. What a shame you weren’t born a turtle.)

by Derek the Ghost, with illustrations by Scott M. Fischer 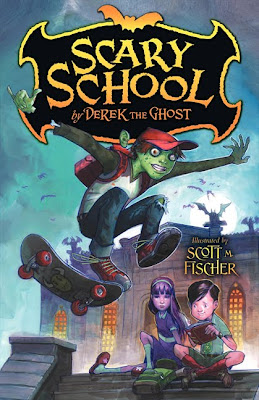 You really shouldn’t complain anyway. It could be much worse. At least you don’t go to Scary School. At Scary School humans go to school with zombies, werewolves, and vampires. The monster students aren’t the big worry, though. The teachers are the scary ones, and by scary I mean they kill a lot of students. Maybe your teacher bugs you, but I bet you don’t have to worry about getting eaten. Each chapter is a short story that introduces a different character. My favorite chapter is the one about Dr. Dragonbreath. Any student who breaks one of his five rules gets eaten. In this story, all but two kids in his class break the fifth rule on the first day of school. There’s also Principal Headcrusher who has huge hands that can—well, her name speaks for itself. The book’s main story is about the Ghoul Games. At the end of the school year the students of Scary School will compete in different games against schools whose students are all monsters. The stakes: Winners get to eat the losers. The book’s narrator is Derek the Ghost who haunts the school since he died in science class. He knows everything that happens in Scary School and promises there will be more books about it. This book cracked me up. You should definitely find a copy to read right now. Oh, wait. You can’t. You’re in school right now. What a shame.

with illustrations by Sally Faye Gardner 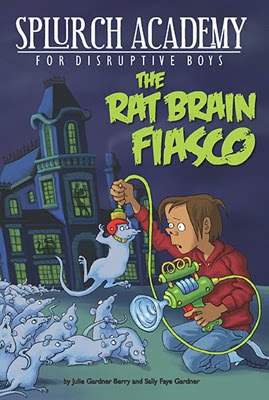 Even though the mortality rate at Splurch Academy isn’t as high as at Scary School, it would be even worse to have to go there. For one thing, Scary School has a great chef that prepares tasty meals for the students. And Scary School students get to go home every day. Splurch Academy is more like a prison. It’s where boys who act up are sent. Headmaster Farley claims he can get them to behave. Cody Mack isn’t there long before he discovers that the faculty are all monsters and that Farley, a vampire, has a plan to control the boys by switching their brains with rats’ brains. The illustrations don’t just show you what you’ve already read, they’re cartoon panels that tell part of the story. This book is funny, but it’s also exciting when Cody Mack and his new friends try to escape Splurch Academy. They also have to work together when they’re rats to get their brains back in their bodies. There’s some mystery, too—the librarian mummy helps them out, but they don’t know why. There are four books out so far in this series. I’ve read three. Probably some afternoon while you’re taking a pop quiz, I’ll kick back and read #4. 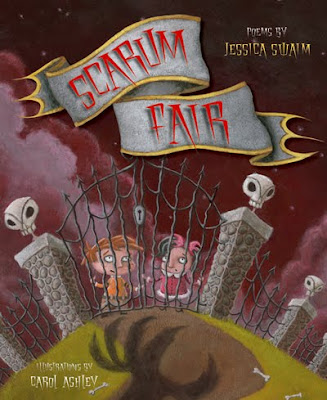 After school you may need a break. Why not go someplace fun to unwind? Someplace like Scarum Fair. The poems in this book tell you how at Scarum Fair you can get bug tattoos that come to life, be in a coffin race, or ride on the Scary-Go-Round. The poems are half funny, half creepy and the illustrations are half ghoulish and half comical. This is the perfect book for a half-invisible turtle like me. Extra bonus: I had Morzant read SCARUM FAIR and it gave him nightmares.

Well, it’s about time for trick-or-treating. With all the time you spend stuck at school, you probably didn’t have time to come up with a great costume. Here’s a Halloween tip: Go as a turtle. It’s a little known fact that they hand out the best candy to turtles.

And don’t stay out too late. It’s a school night.

Wow...yes! Thanks for these book recommends. Will for sure read and will get them for the library too!!

Deb, Soon you’ll be hoisted on the shoulders of grateful readers. They may even name a holiday after you—a holiday the kids will expect the schools to close down for.

Mirka, You’re wise beyond your species. Or are you a turtle, too?