Halloween is almost here. The best part about Halloween is witches. There are two great things about witches:
1. Witches can fly on their brooms.
I can levitate, but that’s not the same as flying. I like how witches can zip and zoom around.
2. Witches have cats.
I have a secret. I like cats. Don’t tell anybody my secret or I’ll play a Halloween trick on you.
ROOM ON THE BROOM
by Julia Donaldson, illustrated by Axel Scheffler
[PICTURE BOOK]
Dial-Penguin Putnam, 2001 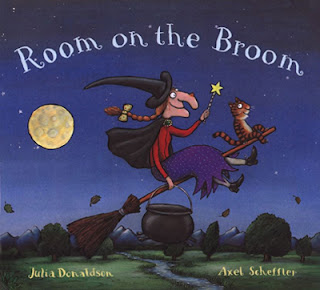 One book about a witch I like a lot is ROOM ON THE BROOM. Lots of people think witches are wicked, but witches can be nice, too. The witch in this book is really nice. She lets a cat, a dog, a bird, and a frog ride on her broom with her. The frog is one rider too many, though, and the broom breaks. The friends crash in a bog where a dragon tries to eat the witch. The cat, dog, bird, and frog trick the dragon into thinking they’re a monster and scare the dragon away. Another thing about witches is that they can do spells. This witch uses a spell to fix her broom. Only she doesn’t just fix it up the way it was. She makes it even better with comfy chairs, a nest, and a sprinkler for the frog. I wish there was room for me on that broom! This is a book I like to have read to me so I can look at the pictures while I listen to the rhyming story.
ONLY A WITCH CAN FLY
by Alison McGhee, illustrated by Taeeun Yoo
[PICTURE BOOK]
Feiwel and Friends-Macmillan, 2009 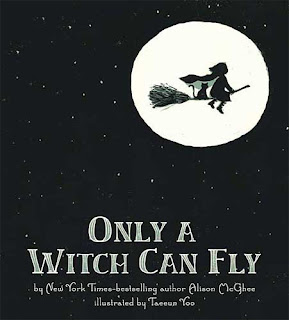 This book is about a little girl who wishes she could fly like a witch. I know how she feels. The story is written as a type of poem called a sestina. There’s a part at the beginning of the book that explains what a sestina is, but I didn’t read that part. I was in a hurry to see if the girl was going to get to fly. She wears a witch costume. The first time she tries to fly on her costume broom, she leaps from a porch railing and crashes. She’s so sad. But then she gets right back on that broom and tries again. And she flies! When I read the words I feel her happiness at being able to fly. It makes me think some day maybe I’ll be able to fly, too. The words give me goosebumps. And I think maybe this book isn’t only about flying. It makes you feel like you can do anything if you believe and try.
HEEBIE-JEEBIE JAMBOREE
by MARY ANN FRASER
[PICTURE BOOK]
Boyds Mills, 2011 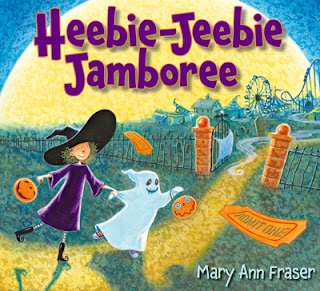 This book has another little girl dressed as a witch for Halloween. She goes out trick-or-treating with her little brother who wears a ghost costume. Two tickets for the HEEBIE-JEEBIE JAMBOREE appear. They decide to go and they find out that the jamboree is held at a cemetery. Because they’re wearing costumes they fit in with all the other creepies who are going. There are vampires, mummies, ghosts, skeletons, black cats, and every other type of Halloween-y creature you can think of. They aren’t scary, though. They’re bright and colorful and all having fun. The jamboree is like a fair, but with things witches and monsters and goblins would like. The carousel has skeleton horses. Brooms are ridden at the rodeo instead of bulls. Witches compete in a brew-making contest. There’s a pumpkin pie-eating contest, too. There’s even a fortune-teller, but she’s not a psychic beagle like Briar. The girl and boy get separated, so the girl has to look all over for her brother. She’s finds him, but not before going all through the cemetery and seeing all the jamboree happenings.
THE HALLO-WIENER
by Dav Pilkey
[PICTURE BOOKS]
Blue Sky Press-Scholastic, 1995 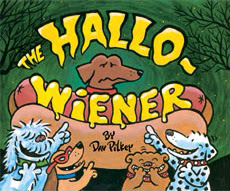 Next to witches, costumes are the best part of Halloween. This is a funny book about a dog named Oscar who is a dachshund. Dachshunds are long dogs with really short legs. On regular days when it isn’t Halloween, the other dogs, and some cats, too, make fun of Oscar. They call him “Wiener Dog.” He doesn’t like that. And he doesn’t like the Halloween costume his mom makes for him. The costume is a hot-dog bun. Because he’s a dachshund, when Oscar wears the hot-dog bun costume he’ll look like a real wiener dog and get laughed at even more. His costume also makes it hard to run. Everybody knows that when you go trick-or-treating you have to go fast, fast, fast so you can get lots of treats. Oscar is having a horrible Halloween. Then a pumpkin-headed creature scares all the mean dogs into a pond. Oscar is low to the ground and he sees cat feet sticking out of the pumpkin-headed creature’s long gown, so he isn’t scared. Oscar chases the cats away. Then he goes into the pond and lets the mean dogs grab on to his floaty hot-dog bun costume while he swims to shore. The best Halloween treat Oscar gets is that he doesn’t get laughed at any more.
EVEN MONSTERS NEED HAIRCUTS
by Matthew McElligott
[PICTURE BOOK]
Walker-Bloomsbury, 2010 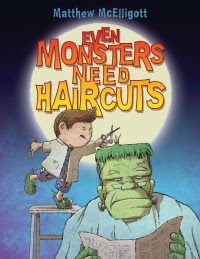 Most people have to get haircuts once in awhile. Not beagles like me, but some other dogs do. I’m not sure about cats. Until I read EVEN MONSTERS NEED HAIRCUTS I never wondered about monsters’ hair before. Now I know monsters need haircuts, too. The monsters in this book are lucky because they know a boy who’s a good barber. He borrows his dad’s barbershop when there’s a full moon and all the monsters come to have their hair done. I like the pictures. My favorite is of the boy braiding Medusa’s snake hair. He has to do it while he’s blindfolded so he won’t turn to stone. I think you’d look good with a Frankenstein’s monster haircut.

When I’m not practicing flying or looking for cats this Halloween, I’ll be reading these books. I bet all my Halloween treats you’ll like them as much as I do.
at 5:05 PM

Mirka and Kelly, Thank you for writing about my list. I worked hard on it. Did you know there are so many books with witches?