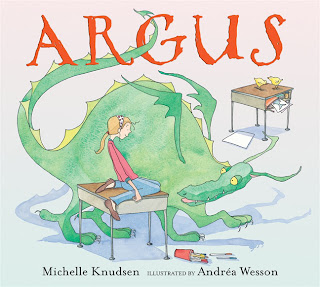 I’m Violet and in case you’re curious, I’m not a baby chick either. I’m a telekinetic puppy who likes a picture book called ARGUS.

In the book the cute girl Sally is at school. Sally’s class has a project and that project is to hatch eggs and to take care of the baby chicks who hatch out of the eggs. All the eggs are white and small and look like chicken eggs except for Sally’s egg that is big and green with spots and looks like a big, spotted not-a-chicken egg. Sally tells the teacher about the big, spotted egg and the teacher tells Sally not to make a big deal about how her egg is big and spotted.

The teacher is funny because she doesn’t think it is a big deal that Argus is a big, green creature. And it is funny when the teacher has to save the baby chicks when Argus tries to eat them and when the teacher has to save the kids when Argus tries to eat them. She stops Argus from eating anybody except maybe for some bugs so those parts are funny and not scary or sad unless you are a bug. Argus isn’t being mean when he tries to eat the baby chicks and the kids. He just doesn’t know better until the teacher teaches him to know better. She is a funny teacher but she is also a good teacher who is cute.

Sally gets sad because even though Argus is cute he’s not like the other baby chicks and Sally can’t hold him or pet his head and at recess Sally and Argus have to go to another part of the playground where Argus won’t cause problems. That makes Sally sad. But do you know what makes her even sadder? Argus goes missing and Sally gets so sad because she misses her big, green creature who is cute and she misses him because she loves him. But this book has a happy ending and I don’t like to tell endings but I think I’d better this time so you won’t worry. The happy ending is that Sally and her teacher and the rest of the class find Argus. When they find him he is looking for bugs to eat.

Argus always smiles and when you read ARGUS you will smile too because Argus is funny and cute. Only bugs won’t smile when reading this book but even bugs will probably smile that’s how good this book is.

Readers who are not bugs except for some that are.

Readers who like fun drawings of fish and squid and dinosaurs.