ReRunday: HAMSTER AND CHEESE and AND THEN THERE WERE GNOMES (Comics)

Originally posted on October 12, 2010.
~
Tuesdays with Morzant:
Mortimer Reviews Two Books
MORZANT: Zulko, humans. Many of you have queried about Mortimer. More specifically you wonder how Mortimer and I work together given that Mortimer doesn’t speak Zeentonian or English and I don’t speak his language of squeeps and rut-rut-ruts. When a close relationship develops, such as that between research partners, communication often transcends spoken language. However, there are times when verbal expression is useful, critical even. There are times when one must call for a fire extinguisher, request a delicious pumpernickel smoothie, or, in the case of my study of Earth literature, read a book aloud to a guinea pig who doesn’t speak Zeentonian or English. For those occasions I invented the CPT, the Cavia porcellus translator. How I developed the CPT with the assistance of Oliver and his telepathic abilities is a story for another Tuesday. But this week, you’ll witness the CPT function as Mortimer reviews the comics GUINEA PIG, PET SHOP PRIVATE EYE #1: HAMSTER AND CHEESE and GUINEA PIG, PET SHOP PRIVATE EYE #2: AND THEN THERE WERE GNOMES by Colleen AF Venable, illustrated by Stephanie Yue (Graphic Universe-Lerner, 2010). Whenever you’re ready, Mortimer, please begin your evaluation.
MORTIMER: Right. These are the first two in a series of comics about animals who live in a pet shop. The pet shop owner, Mr. Venezi, doesn’t know much about animals. He has signs on the animals’ cages to tell what kind of animals are inside, but the signs are wrong. The hamsters’ cage is labeled “koalas” and the mouse cage says “walruses.”

MORZANT: Forgive me for interrupting, Mortimer, but I just realized that I have not yet recorded your reaction to these books. If you don’t mind, I’ll do so now. What was your reaction to Mr. Venezi confusing the hamsters with koalas?

MORTIMER: It made me laugh.

MORZANT: I see. Using Levity Assessment Units Given for Humor, how would you rate your level of amusement at Mr. Venezi’s ignorance of common Earth species?

MORTIMER: The only animal who has a sign with a correct label is the guinea pig. Her name is Sasspants. One day the “G” falls off the word “PIG” on her sign, so the sign says “GUINEA PI.” That makes Hamisher, a funny hamster, think that Sasspants is a P.I.

MORZANT: For those of you who don’t know, P.I. stands for “private investigator.” That’s a sort of detective. How funny is the hamster at that moment?

MORZANT: And his overall funniness in both books?

MORTIMER: One hundred and twelve LAUGHs.

MORZANT: That’s one of our highest LAUGH ratings to date. 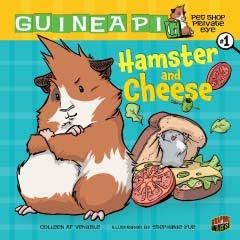 MORTIMER: In the first comic, HAMSTER AND CHEESE, Hamisher wants to hire Sasspants as a private investigator to find out who has been stealing the sandwich that Mr. Venezi brings every day and leaves beside the hamsters’ cage. Mr. Venezi thinks the hamsters have been taking his sandwich and he warns them that if it happens again, he’s going to kick them out of the pet shop. Hamisher wants Sasspants to prove that the hamsters are innocent. Sasspants doesn’t want anything to do with solving the mystery. She just wants to read. She gives in, though, because Hamisher won’t leave her alone. She and Hamisher talk to all the animals in the shop to see if they saw anything suspicious at the time the sandwich was stolen. Hamisher sketches some suspects based on what the goldfish saw. The goldfish register ninety-five LAUGHs.

MORZANT: And how masterfully crafted was the mystery? By the way, we really need to come up with a clever acronym for this measurement.

MORTIMER: It was good. I was fooled by the red herrings.

MORTIMER: Red herrings aren’t fish. They’re suspects in a mystery story who didn’t commit the crime. Like the parchment with oranges who dance on silly felt boomerangs.

MORZANT: You’ve lost me. But I’m sure our Earth friends know what you’re talking about.

MORTIMER: Using Hamisher’s sketches and her guinea pig genius, Sasspants solves the mystery. She sets a trap for the real sandwich stealer and saves the hamsters. It was a surprise to me that the sandwich stealer turned out to be the rice pudding thrown on hot green pavement.

MORZANT: Oh, dear. I believe the CPT is malfunctioning. Let me make a few adjustments. 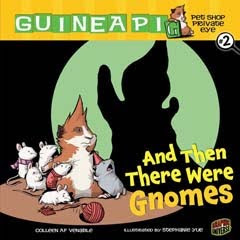 MORTIMER: In the second book, paper clip hold the pickles in the library of soap.

MORZANT: Well, that certainly didn’t help. The batteries must be dying.

MORZANT: This won’t do. I guess I'll have to finish the review myself. However, I’m uncertain as to whether the recommendation of an alien from Zeenton means much to human readers.

MORZANT: There’s no help for it, and so, here I go. Sasspants is called upon once more to solve a mystery in the pet shop. The mice are disappearing and Hamisher is convinced there’s a ghost afoot. The same cast of characters is present: the ever clueless Mr. Venezi, Sasspants with her common sense and keen analytical mind, a bowl of harebrained goldfish, two vain chinchillas, a shifty snake, a parrot, a turtle, and of course Hamisher, the helpful, humorous, endearing, albeit alarmist, hamster. There are also some new characters and variations that contribute to the story's mystery and humor. LAUGHs are based on Earth humor, so I can’t accurately assign a LAUGH rating to AND THEN THERE WERE GNOMES. If only the CPT were functioning properly.

MORZANT: In any case, the writer managed to convince me of a particular reason for the disappearance of the mice only to ultimately reveal an altogether different cause. This was one of Mortimer’s so-called red herrings, I suppose. And yet, the mistaken solution was entirely plausible in that all of the clues provided in words and in pictures supported it. I hesitate to describe those clues to you here for fear that doing so would detract from the fun of trying to puzzle out the mystery on your own. For me, even more enjoyable than trying to solve the mystery, was reading the informative afterward. It provides many interesting facts about the animals on which the fictional characters are based. One last point…I would be remiss were I not to mention the books' illustrations. The artist skillfully rendered these delightful characters both expressively and comically. Don’t you agree, Mortimer?

MORZANT: Hmm. I’d better check the CPT's calibration. Good-bye for now, humans. I do hope that the CPT's untimely failure won’t deter you from reading the two comics in the GUINEA PIG, PET SHOP PRIVATE EYE series. I didn’t need the CPT to understand how much Mortimer enjoyed them. We're both looking forward to the third book, THE FERRET'S A FOOT, which will be out in January 2011.