A Book Review by Violet 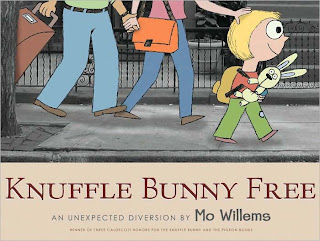 Knuffle Bunny is a stuffed bunny that belongs to a little girl named Trixie. The book I’m reviewing today is the third book about Trixie and Knuffle Bunny. Trixie is a nice girl but she is careless. She’s always losing poor Knuffle Bunny.

Do you know what Trixie loses in the third book, KNUFFLE BUNNY FREE: AN UNEXPECTED DIVERSION (Balzer & Bray-HarperCollins, 2010)? I will give you a hint: It has floppy ears and is not a wallet.

When it’s time to go home Trixie and her parents get on the plane and there’s Knuffle Bunny. That means Knuffle Bunny probably never got off the plane to play with lots of other kids in lots of different places. Knuffle Bunny was probably in the plane reading magazines and eating peanuts the whole time.

Trixie is so happy to have Knuffle Bunny back. But then she gives Knuffle Bunny to a baby in the seat behind her because the baby is crying and Trixie wants to make the baby happy. Trixie may be a careless girl but she is also a nice girl.

The art is really good in these books. Trixie and her parents and Knuffle Bunny and all the other people and animals in the books are drawings. They look like cartoons and I love the expressions they make and the colors of their clothes and the color of the inside of Knuffle Bunny’s ears which is purple. I like that because purple is my favorite color.

The parts of the pictures that aren’t Trixie or her parents or Knuffle Bunny or the other people or animals are photographs.

And I just remembered I have one more favorite picture. It’s okay to have three favorites because this is the third Knuffle Bunny book. The other picture I like best is when Trixie tries some coffee and she doesn’t like the taste so she makes a funny face.

Oh I've read this book while in the library a few months back and loved it. I also like the review! Fresh lovely voice. ;-)

So glad I found your review. I am almost embarrassed to say (because I love Mo Willems so much) that I have only read the first Knuffle Bunny book. But this one looks so adorable. Did you know that the Knuffle Bunny books have been made into a children's musical, too? I'm going to try and see it this winter and so will have to read the whole series before then. Thanks again for a sweet review!

Hi Kerry, I did not know Knuffle Bunny was in a musical. I would like to see and hear that musical because I bet Knuffle Bunny has a good singing voice and I would love to howl along. I have a very good howling voice. Tell me later if the musical was good or if you want to take me with you that will be good too. Good-bye.