A Book Review by Oliver

(with a little help from Violet) 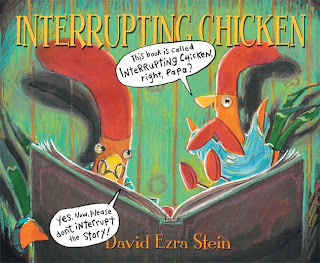 Hi. I’m Violet. Remember me? I’m going to help Oliver do his first book review since I’ve gotten so good at book reviews and he hasn’t done a book review before. He’s shy. He doesn’t talk much. He’s telepathic so he usually thinks to you instead of talking and it kind of tickles so don’t be surprised when he tells you about the book and your brain tickles. Ready Oliver? Oliver? He’s being shy. It’s okay, Oliver. Tell everybody about INTERRUPTING CHICKEN by David Ezra Stein (Candlewick, 2010).

OLIVER: It’s a picture book about—

OLIVER: Okay. The first book Papa reads is Hansel and Gretel. I like that story.

VIOLET: Tell them what happens next, Oliver.

OLIVER: The little red chicken asks Papa to read her another book.

OLIVER: Chicken Little! And just at the part when Chicken Little is about to tell everybody that the sky is falling, the little red chicken says “It was just an acorn.” And that’s the end of that story! There’s a funny picture of Papa who looks so frustrated because the little red chicken has interrupted him again. Isn’t that a funny picture, Oliver?

VIOLET: You did a good book review. Didn’t I tell you it would be easy?