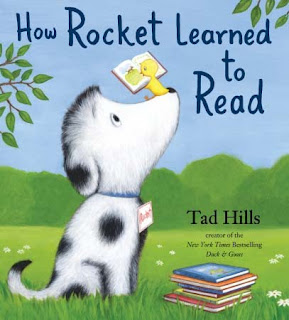 HOW ROCKET LEARNED TO READ is about a dog named Rocket who learns to read. He doesn’t love to read at the beginning of the book because he doesn’t know how. He just loves to play and nap. Then a bird comes and tells him that she is his teacher and he is her student. He doesn’t want to be her student at first, but then the bird reads him a story that he likes and he finds out that he likes books and he wants to be her student. So Rocket is a student and the bird teacher teaches Rocket the alphabet. All during the fall the bird teaches Rocket the alphabet and reads him stories. But then winter comes and because she is the type of bird who flies south for the winter, she flies south for the winter. I don’t know why some birds fly south for the winter. Probably winter isn’t good feather weather. The poor south-flying birds miss all the fun winter snow. But Rocket doesn’t. He plays in the snow all winter and practices the alphabet by making the ABCs in the snow. He gets to be really good at spelling, too. And then in the spring the bird comes back and they read lots and lots of books together. And you know what? I just thought of something. I bet the bird had to fly south because maybe there’s a dog in Florida who is her student and she flies south to be his teacher during the winter. They don’t have snow to play with in Florida in the winter, so there is plently of time to learn to read. 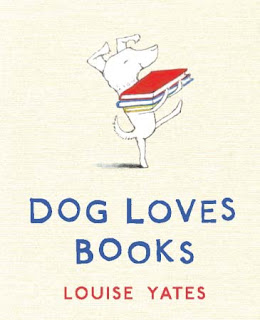 The other dog who loves to read is called Dog and his book is DOG LOVES BOOKS. I like this dog because he loves to read and his ears are funny. His ears tell how he feels. At the beginning of the book his ears are perky and happy because he is excited and he is excited because he is going to open a bookstore because he loves books. But then his ears get droopy because nobody comes to his store to buy books. A woman comes to buy tea and a man comes to ask for directions. The book doesn’t say where the man is going but it doesn’t matter because that’s not what the book is about. Dog is disappointed that the man doesn’t buy any books and his ears get droopy. Then he remembers he is in a bookstore and finds himself a book to read to cheer himself up and that’s when his ears get happy again. He plays with dinosaurs and kangaroos and space aliens. Only he’s not really playing with dinosaurs and kangaroos and space aliens, he’s just reading about them and that helps his imagination pretend he is playing with dinosaurs and kangaroos and space aliens. And when Dog is done reading, a girl comes in the store and the girl doesn’t want tea or directions, she wants to buy books. Dog is happy because he gets to help her pick out some books and it’s fun when you can help someone find good books. I know that’s true because I’m having fun telling you about these two good books.

I will tell you one more thing about these books. The author of the book about Rocket made the pictures for the book. I love how he made Rocket look soft and fuzzy. I can tell Rocket would be nice to cuddle with during a nap or while reading a book.

The author of the book about Dog also made the pictures for the book. She’s the one who gave Dog his funny, bendy ears and the space alien four arms.

Dogs who can’t read yet and know a bird or a kid who will read to them.

Kids who can’t read yet and know a bird or a dog who will read to them.

Dogs and kids who don’t like to read. (When they read these books, they will find out they really do like to read.)

This is the end of my review. Good-bye.

ROTFLOL! You are one funny dog! I also want to add that I have read the book How Rocket Learned to Read and its grrreat!

Hi Shelsie, I am glad you like HOW ROCKET LEARNED TO READ because it is a good book and I hope lots of readers who like good books read it. Thank you for saying I am funny. Did you know I am also telekinetic? Good-bye.

We love the Rocket book and iPad app. We'll have to check out Dog Loves Books!