MORZANT: Zulko, humans. You may remember that the last time we got together, Norman postponed my planned interview with Bigfoot without consulting me. But your patience is about to be rewarded, Bigfoot fans. Bigfoot has graciously agreed to meet with me today.

MORZANT: That must be him. Stand by for the interview of the century! We’ll soon know Bigfoot’s favorite soup and what books he’d take with him for an extended stay on a deserted island.

MORZANT: Yes, I did make more donuts. For Bigfoot. For Bigfoot to eat while I interview him. Today. Norman. Please tell me you didn’t send Bigfoot away. Again.

MORZANT: Thank the High Plains of Oklahoma. Is there something I can do for you? Preferably at a time when I’m not expecting Bigfoot at any moment.

MORZANT: As I just said, I’m expecting him at any moment. Oh. I see. You sent Bigfoot away again, didn’t you?

MORZANT: Then why did you tell me that you didn’t send Bigfoot away?

NORMAN: You asked me not to. What could I do? You said “please.” Don’t worry. He’ll come back. Probably. To tell the truth, he did seem a little put out.

MORZANT: What do you want, Norman? You want Bigfoot’s donuts? Fine. Take one. Take them all.

NORMAN: Calm down. I actually stopped by to help you with your studies of Earth literature. But if you’d rather not be disturbed, I’ll go. Do you have a bag or something for the donuts?

MORZANT: I’m sorry I snapped at you. You actually came to help me? Have you been working on your novel? 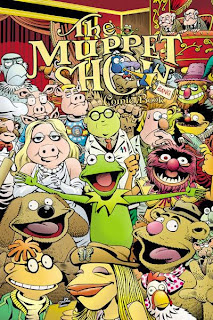 NORMAN: Yes. But that’s not why I’m here. I came to show you this comic book. It’s called THE MUPPET SHOW COMIC BOOK: MEET THE MUPPETS (Boom! Kids-Boom Entertainment, 2009). I thought you might like it because one of the characters is Kermit—

MORZANT: The Frog. Wonderful! I adore Kermit the Frog.

NORMAN: Wait. What? You know about Kermit the Frog?

MORZANT: Of course. I realize your bringing that cartoon periodical here was a ruse so you could needle me yet again about my being a frog, which I’m not, but I must disappoint you. I'm already familiar with THE MUPPET SHOW and Kermit the Frog.

NORMAN: You’ve read this comic? Was it delivered as part of your frog book-of-the-month subscription?

MORZANT: Humorous, Norman. I don’t know anything about your comic book as you call it, but I’m quite fond of THE MUPPET SHOW television program.

NORMAN: THE MUPPET SHOW was on TV?

MORZANT: Yes. A Zeentonian satellite positioned near this solar system picked up electromagnetic waves of THE MUPPET SHOW and transmitted them to Zeenton. Those images were the first proof we had that life existed on your planet. It’s a terrific program. Can you imagine my surprise when I finally arrived on Earth and found considerably fewer felt-based beings than expected?

MORZANT: If I remember correctly, THE MUPPET SHOW was a theatrical production of musical numbers and comedic sketches performed by various puppets called Muppets. In between the acts, a plot progressed behind the scenes. For example, a minor, albeit comical, inconvenience might befall the show’s guest star or its regular talent and that obstacle would interfere with the onstage performances. There was an audience in the Muppet theater which also consisted of Muppets. Interestingly, this show within a show device is employed in William Shakespeare’s HAMLET. It would seem Kermit and his thespian comrades inspired Earth’s most celebrated playwright. May I see your comic book?

MORZANT: Yes. This is just the same as the television program. There’s Fozzie with his gags and guffaws. The brilliant Doctor Bunsen Honeydew with his hapless lab assistant, Beaker. We can’t forget Gonzo, a cryptid if I ever saw one. And of course, Kermit the Frog orchestrates the entire show. What’s the matter, Norman? None of your usual quips?

NORMAN: What can I say? I was going to tell you about the exploding frogs on a log. Well, technically they’re toads, but I wasn’t going to tell you that. After that, I had a bit about the part in the comic where the Swedish Chef tries to make frogs’ legs. Then I was going close with something about Kermit and his banjo and ask you whether all frogs are good banjo players. I probably would have asked you to pluck out a little tune for me.

MORZANT: I almost feel guilty for foiling your plans to use such funny material. You should know, this comic book almost makes up for your having interrupted my interview with Bigfoot. Again. It has several segments devoted to my favorite recurring Muppet skit, Pigs in Space. Captain Link Hogthrob, First Mate Miss Piggy, and Dr. Strangepork always get mixed up in an amusing space predicament.

NORMAN: I like Pigs in Space, too. It’s really funny. There’s just one thing I would change.

Good-bye for now, humans. As to an interview with Bigfoot, perhaps I can entice him back with another batch of homemade donuts at a time when Norman is on vacation.

I loved the Muppets growing up and even saved a bunch of Muppet Magazines from when I was young. Glad to hear the Muppets are still around and keeping busy!