YOU by Charles Benoit (YA)

MORZANT: Zulko, humans. As you may know, Norman interrupted my previous two blog postings for no other reason than to rattle my chain with his books about frogs. He was quite successful in doing so. That’s why this week I have sequestered myself and this week’s guest in an undisclosed location. Norman won’t be able to disturb us and he and that copy of THE CELEBRATED JUMPING FROG OF CALAVERAS COUNTY I saw him carrying around this morning can go jump off a—

MORZANT: Oh, sorry. I’m happy for the opportunity to talk with you today, Penny. You had a book you wanted to tell me about? Something for my studies of Earth literature?

PENNY: It’s a book I think you will be very interested in. In fact, after I tell you about it, you are going to want to rush out and find a copy so that you can read it right away. Can you guess what the title of the book is?

MORZANT: THE HISTORY OF TRANSATLANTIC COMMUNICATION?

PENNY: You are not even close.

MORZANT: Ah, I wasn’t thinking. I forgot that you usually read fiction of the supernatural, macabre, or thriller variety. Is the title THE PRESCIENT MURDERER CREEPS AT MIDNIGHT?

PENNY: I’d totally read a book with a character who foresees the murders he’ll one day commit. But you are wrong again. This book doesn’t have any supernatural parts. Would you like to take another guess? I’ll give you a hint. It’s a unique book. You might even say it’s you-nique.

MORZANT: Oh, no. Norman got to you, didn’t he? He sent you here to tell me about THE CELEBRATED JUMPING FROG OF CALAVERAS COUNTY, didn’t he? 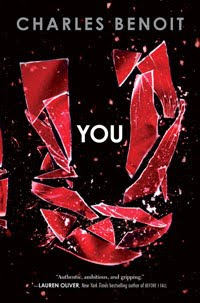 PENNY: What? No. The book is called YOU (HarperTeen-HarperCollins, 2010).

PENNY: It’s about you. You are in the tenth grade. You like math. You are one of the “Hoodies” and a jock named Jake makes your life even more miserable than it already is. You are angry all the time. You have a bit of a temper. Your parents keep hassling you to get a job. The only really good thing in your life is the girl you like, Ashley. But you don’t know if she likes you.

MORZANT: Aside from the part about me liking math, none of that information about me is accurate. I do get miffed at Norman sometimes, but I’d hardly say I’m angry all the time. And I don’t know a girl named Ashley, but if I did she would probably like me, don’t you think?

PENNY: Then a new kid comes to school. He’s strange. And he’s got a smart-alecky comment for every situation. His name is Zack.

MORZANT: Are you sure it isn’t Norman?

PENNY: No. It’s Zack. And he’s taken a special interest in you, though you can’t figure out why. When he introduces himself to you, he already knows your name is Kyle Chase.

MORZANT: No, I’m Morzant from the planet Zeenton. I like math and food that is unusually stretchy.

PENNY: When you’re reading this book, you are Kyle Chase.

MORZANT: What are you talking about?

PENNY: It’s written in the second person. That’s why I said it’s you-nique.

MORZANT: Second person? What does that mean?

PENNY: Well, a story written in the first person is all about what I did. I went to the grocery store. I bought a bunch of bananas. The bananas were rotten, so I had to throw them away.

MORZANT: That’s disappointing. You should have returned them for a refund.

PENNY: No, you don’t understand. That was just an example of how a novel written in the first person sounds. The narrator gives a firsthand account of the story’s events because the narrator is the one who experienced those events. If the novel is written in the third person it would be like, Penny C. Monster went to the grocery store where she bought a bunch of bananas. They were rotten, so her friend Morzant suggested she take them back to the store for a refund. Get it?

MORZANT: Maybe I do. What is second person then?

PENNY: Second person would be like, you went to the store. You decided that you would buy papayas because last time the bananas were rotten. Later, at home, you remembered you’re allergic to papayas.

MORZANT: I’m not as well-read as you, but I have never encountered such a narrative. It seems as though it would be strange to read a novel written in that way.

PENNY: I know. I thought the same thing. But it wasn’t weird at all. I really felt close to the main character and related to him.

PENNY: Yeah. Right. Me. Uh, you. The story sucked me in. I cared about what happened to me. I mean you. I mean the main character of YOU. There’s also a bit of a mystery. The book opens with you surrounded by broken glass and lots of blood. You—the reader, not the character—get the idea that something horrible happened, like maybe somebody even died. The rest of the book is a flashback leading up to that moment. Not til the end do you—the reader, not the character—know what happened. And, even though I know how YOU ends, I’ll probably read it again. I really like YOU.

MORZANT: And I like you, too, Penny. Thank you for bringing this book to my attention. I will indeed study it.

PENNY: Norman asked me to give you something.

PENNY: Sorry. I have trouble saying “no.”

MORZANT: It’s okay. It’s getting so it doesn’t feel like Tuesday without a frog book.

Good-bye for now, humans. I hope you enjoyed this post and that you will be sure to read YOU as soon as you possibly can. See you next time!