DAYDREAMS OF A SOLITARY HAMSTER by Astrid Desbordes (Picture Book)

A Book Review by Briar 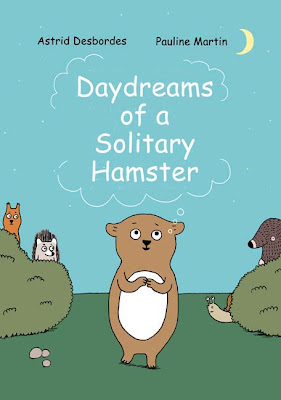 You might wonder what a psychic beagle likes to read. Being psychic is about big picture flashes, so I’m hardly ever caught off-guard by a plot twist. I can sense a book will have a cliffhanger ending the second I turn the first page. But surprises in books are about more than unexpected developments, suspenseful moments, and unanswered questions. (I know the answers to those before the sequels come out anyway.) Surprises also come with beautifully described details and rhythmic language. They come when a new idea or a long-forgotten memory is triggered. Surprises come when a writer can make you see or smell or hear or feel something as if you're experiencing it firsthand. Those sensations can be more vivid to me than my psychic visions.

What never fails to surprise me, what seems almost supernatural, is when a single book reveals something new each time I read it. An example of a book like this is DAYDREAMS OF A SOLITARY HAMSTER by Astrid Desbordes, illustrated by Pauline Martin, translated from French by Claudia Bedrick (Enchanted Lion Books, 2010).

DAYDREAMS OF A SOLITARY HAMSTER is sort of a picture book and sort of a comic book. It’s made up of a series of short comics that tie together a story. On the surface, the story is simple: A conceited hamster plans to have a birthday party.

I read DAYDREAMS OF A SOLITARY HAMSTER the first time with Oliver, Lenny, and Violet. We laughed together at Hamster’s self-centered and rude acts, like when he assigns presents for his friends to bring to his birthday party. He struggles with how to invite Rabbit, who’s sort of his unwitting nemesis, finally deciding to send a disinvitation instead. Then there’s the comic where Hamster decides to sleep under the stars, not so he can enjoy the stars but so that they can enjoy gazing at him. We liked the sweet scenes of friendship when Mole offers kind words to Hedgehog who wishes he were soft like the other animals, and when Mole shares her secret with Snail, that she’s writing a novel. The puppies liked the end when Hamster gets a present he didn’t ask for—a song sung by his friends in his honor—and it’s his favorite present of all.

When I read DAYDREAMS OF A SOLITARY HAMSTER a second time, I noticed things I hadn’t before. For all his boasting, Hamster is actually insecure. He keeps a diary, and in it he embellishes how much he is adored by his friends. In the comic where he is allowing the stars to gaze upon him, his arrogance is undermined by his fear that, from so far away, the stars won’t recognize him as the hamster he is.

In fact, during the second reading, I noticed that all the characters are insecure. They long to find their place in the world and to be seen for who they are. Snail moves so slowly that he is often overlooked by those bustling around him; he feels invisible. Mole tries to be special by writing a novel and then revealing that part of herself to her friends. Hedgehog’s quills make him feel different from the others. Hamster is jealous of his friends’ admiration for Rabbit. At the end of the book, at the party, each of the characters’ need to be recognized and valued is met in some way. In Hamster’s case, it’s the song—directed by party-crasher Rabbit, no less—his friends sing to him about how wonderful he is that lets him know, even with his many shortcomings, he is appreciated.

On the third reading, I found new ways I related to each of the characters as they experienced discontent, doubt, and joy. I don’t know what I’ll find the next time I read DAYDREAMS OF A SOLITARY HAMSTER, and that's amazing. For a psychic beagle, surprises are hard to come by.