A Book Review by Violet (all on her own) 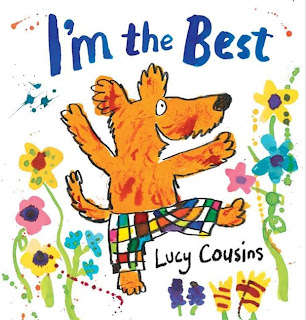 This is my second book review and I think you will like it because I wrote one review already and that was good practice and I am probably going to get even better at writing reviews and I pick out the best books to read and review. You might not like my review because maybe I need even more practice. But I know you will like the book anyway because it is so good.

I’M THE BEST (Candlewick, 2010) is about a dog named Dog. He wears colorful checkered pants. The pants don’t have anything to do with the story. I just like them.

But then you turn the happy page and see his friends are sad because they aren’t the best at anything and that makes them sad because it’s fun to be the best at something. But they lost all the contests so they are sad. This page doesn’t have exploding colors of happiness. It has sad, mopey faces of sadness.

But Mole reminds them that they are the best at something. Dog and Goose had a contest about digging holes and—oops, I wasn’t going to tell you about the other contests but I just did and I didn’t mean to but since I already did I will tell you what I was going to say. Dog won the digging contest and said “I win. I’m the best.” But he was wrong. He won that contest with Goose but then he has the same digging contest with Mole and he loses so this time Mole gets to say “I win. I’m the best.” And that makes Mole happy. But that makes Dog sad. And they have more contests and Dog loses them all because Goose can goosey paddle faster than Dog can doggy paddle and so Goose wins the swimming contest. Goose is happy and Dog is sad. And then Dog loses contests with Ladybug and Donkey. And he is really sad. He isn’t the best at anything any more.

Dog is feeling really sad now that he has lost all the contests and isn’t the best at anything. Then he knows how sad his friends felt when they lost all the contests and thought they weren’t the best at anything. And that makes Dog really, really sad because now he knows that he hurt their feelings. He says he is sorry to all of his friends. And guess what? They forgive him. And because he is such a good friend to say he is sorry it turns out that he is the best at something. He is their best friend. And he also has the best fluffy ears. And so the book is over and everybody is happy and everybody is the best at something. And then the last page is funny because Dog is still Dog and he brags that having the best fluffy ears is the best best thing. But I don’t think his friends will be mad or sad because they know how he is and they love him. And I love this book and I love writing reviews and I think I am the best at writing reviews. Well, maybe not the best best, but pretty best.

I think you are the best at writing reviews.

Dear Bridget, Thank you for saying I am the best at writing reviews. You are so nice. You are the best at drawing banana cars. I think everybody is the best at something. Good-bye.