Three Minutes with a Crazed Gardener

Normanday #5: A Picture is Worth at Least Three Minutes of Words

Several writers, including the first non-tortoise-old participant, sent me what they wrote about the missing unicorn. Before we get to those entries, I want to have a little chat with those of you who aren’t writing along with the rest of us.

Why aren’t you? Are you shy about sharing what you write? I get it. Heck, I’m a turtle. I’ve been known to hide in my shell now and then. But you should write anyway. You don’t have to send me what you write. Just do the prompts on your own for the fun of it. Or send me what you write under a secret identity, a.k.a pseudonym, a.k.a. pen name, a.k.a. peanut butter and jelly sandwich. (One of those “a.k.a.”s is a pseudonym for pseudonym. See how it works?)

I’m guessing some of you think you’re not good writers. But you are. Don’t argue with an unbelievably handsome genius with minty fresh breath. Everybody can write creatively. Everybody.

Here’s a pointer to help you get started. Ready?

Got it? Now obey your half-invisible turtle overlord and write for three minutes about this photograph.

What’s the deal with this guy? 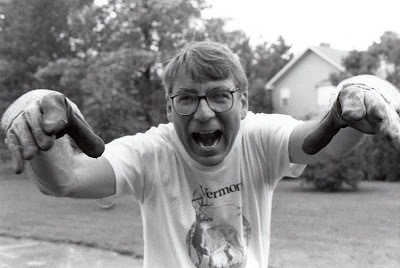 Email what you wrote to woof at bright dot net by the end of this Saturday (put “Norman is Never Wrong” in the subject line). I’ll post three of my favorite entries next Monday. Include your first name (or, even better, use a pen name) and age (unless you’re tortoise-old). If you’re a published writer, include a biography to be posted with your entry.

…were asked to unicorn-sit while your friend was out of town. The unicorn really didn’t like you and the first chance he got, he bolted. You looked everywhere for him. Just when you started to think how you’d tell your friend his beloved unicorn was gone forever, you spotted the unicorn…

…sailing by, in the backseat of a taxi. He was eating cotton candy and wearing a green foam hat in the shape of the Statue of Liberty. He gave me a leer as he flew past.

“Stop!” I cried, running after the cab. Hey, this is just like a scene in a movie, I thought to myself. Then I stopped, because there was no way I could catch the cab on foot. But I didn't need to. The cab hit a red light only a few yards away. I ran up to the cab. I wrenched open the door. “What are you doing?” I asked.

“Having fun?” the unicorn said.

“Get in or get out,” the cab driver said, impatiently. I jumped in and closed the door. Everything smelled like salami. The cab roared ahead. The unicorn moved over, making a show of being irritated. “Look, I don't mean to be rude,” he said, “but you’re boring. You’re no fun. And I don’t want to be with you.”

“Did you say you didn’t mean to be rude?” I asked. “Because I don’t see how any of what you just said is—”

“Okay, okay.” The unicorn said. He handed me his disposable camera and cotton candy. He rummaged in a backpack. “I only meant, your idea of ‘fun’ is to watch nature shows on TV and boil vegetables and wander around gardens.”

“You’re a unicorn,” I said, confused. I couldn’t help but take a nibble of the cotton candy. “I thought you’d like that stuff.”

“I like FUN,” the unicorn said. “I’m a magical creature, not a senior citizen. If you and I are going to get along, you need to show me a good time.”

I looked at his souvenir hat. “Did you go see the Statue of Liberty?” I asked.

“Yep. And I was just heading to the top of Rockefeller Center.”

“I love Rockefeller Center. They have ice skating there, you know.”

“Seriously?” He stared at me with those deep purple eyes. “I love ice skating.”

I settled back into the sticky, smelly seat of the cab. I ate more cotton candy as I reassessed this whole unicorn thing. Maybe he wasn’t as fragile as I thought. Maybe I needed to loosen up a bit. Maybe—

“By the way, I don’t have any cab fare,” the unicorn whispered, waving around an empty wallet. He stuck it back in the bag. “How about when we get there, I just brandish my horn at the driver and then run off when he panics. You game?”

“Um, I have some cash,” I said, as the cab slowed for our stop. Magical or not, I was not going to participate in anything illegal.

The unicorn looked disappointed. “See? Boring. You. Like this.” And he pressed two hooves side by side.

I bit my lip as the cab driver parked the car. He turned towards us. “Thirty dollars,” he said.

And right then and there, I made a snap decision. No more boiled vegetables. No more nature shows. I curled my fingers around the door handle.

I said, “hi.” When the unicorn spotted me, he sprang and started to run, but I jumped in front of him and said, “Stop! I am not going to hurt you.” I put on his collar and took the unicorn back to the house. One hour later, my friend came back home and asked if the unicorn was any trouble. I said, “No.”

…back at home, sitting on the couch with hoofs on the coffee table, watching his favorite TV show, “Big Horns” on Animal Planet and munching in a feed bag of warmed up toasty oats. He jumped up on all fours when he noticed I was standing there. I was angry and it must have shown because this unicorn had a frightened look in his eyes. Not only had I just spent hours searching for the one-horned wonder, while he probably galloped around the house once, came back inside and sat his rump down, eyes glued to the TV, I was fighting a cold and had a pounding headache, too. I looked around the living room. What a mess! Toasty oats were everywhere and a hint of burnt oats lingered in the air. “Go to your stall!” I growled as I pointed to the hallway. Dejected, the unicorn did as I commanded, dropping the feed bag with a thud and causing the last remaining oats to spill out onto the floor. With head hung low, he trotted to his room. “Teenagers!” I barked as I threw my paws up in frustration and started to hunt for the vacuum.

I like the twist at the end of the last one. The narrator has paws. Funny, whenever I’m reading, I always assume the narrator is a turtle.

Thanks again to this weeks’ writers for sharing. To the rest of you, come out of your shells and give it a try.

Loving the fun of the impromptu writing exercise. Looking forward to the the next one. What IS with the guy in the picture? Hmm.....