THIS DARK ENDEAVOR: THE APPRENTICESHIP OF VICTOR FRANKENSTEIN (YA) 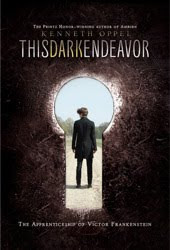 What does that phrase bring to mind?

Fair enough. The Incredible Hulk is huge and green, but not what I was going for. Try again.

Seriously? The frozen vegetable spokesman? He’s a giant, not a monster. Give it another shot.

You’re right, Penny C. Monster is a huge green monster. But I wasn’t thinking of her either.

Let’s back up. What if I added a few more details about the huge green monster:

• more stitches than a homemade quilt

• the top of his head could double as an end table

Finally. Yes. FRANKENSTEIN. Was that so hard?

Thanks to countless popular culture references to FRANKENSTEIN, even those of us who haven’t read the 1818 classic novel by Mary Shelley have an idea of who Frankenstein is. And no, he isn’t the huge green monster with neck bolts, stitches, and a noggin you could use as an ironing board. Victor Frankenstein is the guy who creates the huge green monster. And he doesn’t do it because he needs a place to set his coffee mug. At least I assume that’s not what motivates him to reanimate the stitched-together bits and pieces of corpses. Like I said, I never read Mary Shelley’s book. For all I know, the real Frankenstein’s monster isn’t even green. Everything I know about FRANKENSTEIN I learned from cartoons, Boris Karloff, store-bought Halloween costumes, and bizarre novelty breakfast cereals.

Kenneth Oppel’s THIS DARK ENDEAVOR is about Victor Frankenstein’s early years. It’s kind of like an origin story minus the radioactive spiders. Or, okay, gamma rays. What is it with your fixation on the Hulk today?

The book is told from Victor’s point of view. He’s sixteen. He and his twin brother Konrad grew up with their distant cousin, Elizabeth. She was like a sister to them, until they all hit puberty. Now the brothers both have a thing for her. Victor feels like he’s in competition with Konrad for Elizabeth, but he still loves his brother and is devastated when Konrad becomes deathly ill. Victor is willing to do anything it takes to help Konrad get well, even dabble in alchemy against his father’s orders.

And boy, his dad sure isn’t happy about Victor’s new interest in alchemy. But what else is an ambitious teenager desperate to save his brother to do when he finds, in his own home, a book containing instructions for making the Elixir of Life, a concoction that’s supposed to make a person pretty much immortal? Well, for one, find somebody who can decipher the secret code concealing the Elixir of Life’s ingredients. Polidori, a disgraced alchemist, cracks the code and sends Victor, Elizabeth, and their timid friend Henry to collect what’s needed.

What’s needed happens to be three things that are hard to come by. “Hard” meaning they could die trying. They have to climb a vulture-infested tree on a moonless night, go spelunking (look it up), and for the final ingredient Victor must—wait, I’m getting dangerously close to pulling a Penny and revealing too much. Just trust me when I say this book is full of adventure, suspense, and twists.

Do you know what makes suspenseful adventures extra satisfying to read? Great characters. This book is full of them. I like Victor most of all. His human failings make him a sympathetic guy. By the end of this book, you’ll understand the reasons his older self reanimates the stitched-together bits and pieces of corpses.

Hint: It isn’t because he needs a place to set his coffee mug.