Zulko, humans. Perhaps you recall two years ago when my dear horror-loving friend Penny requested we, her cryptid comrades, help her draw attention to books ideal for reading during the season of the macabre—that is to say, Halloween. Several of us obliged; however, last autumn we were preoccupied with a bowling league and did not repeat the exercise. Since the Cryptid Crankers are bowing out of the bowling league this year (due to Bigfoot’s rather extreme reaction to an unfortunate miscommunication whereby I mistakenly believed I was meant to avoid knocking down the bowling pins), we have agreed once more to accommodate Penny’s wishes and compile Halloween reading lists.

Penny called the first haunting literary initiative S.C.R.E.A.M., an acronym that stands for Super Creepy Reading Extravaganza A la Mode. If you wish to refresh your memory about the origins of S.C.R.E.A.M., you can examine the original post about it here. Penny has dubbed this year’s effort S.C.R.E.A.M II: Back for Seconds.

Two years ago, the purpose for reading stories with the intent to, as Penny would say, “creep yourself out” eluded me. In the interim, my studies of Earth literature have deepened my appreciation for the multitudinous reasons to read. I’ve found even I enjoy the occasional vicarious thrill induced by experiencing a zombie apocalypse through the filter of the written word. My studies have also taught me that the realm of the macabre extends beyond the boundaries of fear and into those of mystery, pathos, and humor.

And so Halloween enthusiasts, here is my contribution to S.C.R.E.A.M II: Back for Seconds.

YOUR SKELETON IS SHOWING:
RYHMES OF BLUNDER FROM SIX FEET UNDER
by Kurt Cyrus, illustrated by Crab Scrambly
[PICTURE BOOK]
Disney-Hyperion, 2013 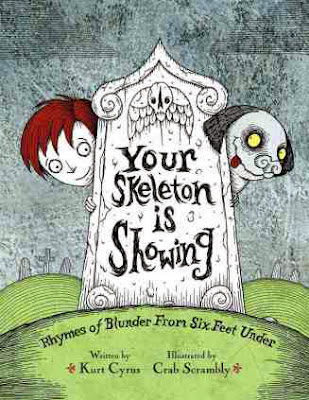 I’ll begin my list with this picture book poetry collection. The poems can be appreciated individually, but the book is additionally compelling because of the narrative tying the poems together. As a boy traverses a cemetery, he encounters a friendly canine apparition. The boy continues on, attempting to help the ghost dog locate his departed master, all the while encountering the cemetery’s spectral residents. Each meeting is marked, like a gravestone, with a poem describing how the person died. During the course of my studies of Earth literature, I’ve learned poetry can prompt readers to think more deeply about a subject, ignite a sense of wonder, and even elicit a laugh. While the comedic potential of poetry is not new to me, the amalgam of the macabre with humor is. What makes the various gruesome means of demise described in this book so funny? Perhaps it’s the poems’ farcical rhymes full of clever wordplay. Perhaps it’s the outrageously comical illustrations depicting equally outrageous situations. Understanding the appeal of what is often referred to as “dark humor” will undoubtedly require further consideration and experimentation on my part. All I can offer you for now is anecdotal evidence: This book made me laugh. I hope it will bring similar mirth to your Halloween season. 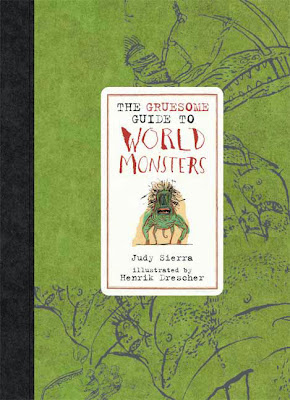 Monsters are a Halloween staple. In a time not so distant from the present, I would have read this book about monsters as if it were non-fiction, believing the creatures described within to be actual Earth species. Indeed, Bigfoot and Norman would have taken great pleasure in witnessing such credulity on my part and would have taken measures to further encourage it. Having been on your planet for some time now, however, I recognize that not everything I read is strictly true or accurate. What’s fascinating about this book isn’t that it proffers that the creatures described within actually exist, but that humans from earlier eras believed that they did. Further, the author explains that the creatures were born—figuratively speaking—when scientific explanations for natural phenomenon eluded humans. Bizarre creatures were, for instance, blamed for illnesses beyond the scope of human understanding. In other cases, humans might have used the specter of malicious creatures to influence other humans. I wonder, too, if perhaps there were prehistoric pranksters—Bigfoot and Norman’s ancient predecessors. THE GRUESOME GUIDE TO WORLD MONSTERS is presented as a guide to monsters from all regions of this planet. An earlier, more gullible me would have taken the “Gruesomeness Rating” (ostensibly provided to gauge the likeliness of survival upon encountering each type of creature) and tips to increase survival odds as authoritative information. The modern, more enlightened me realizes these parts are actually examples of dark humor. 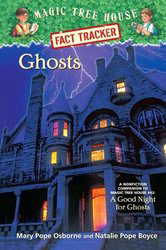 Not unlike early humans, my lack of understanding in Earth matters once led me to believe that mummies, vampires, and zombies are real as opposed to fantastical fictional beings concocted by imaginative storytellers. There are many among the human population who would characterize my friends and me as similarly unreal. Not you, of course, but skeptics abound. I don’t take offense at those who disbelieve my existence or that of my friends, though. There are times when I’m uncertain how to classify certain beings. Take ghosts, for example. Are they cryptids, beings whose possible existence is unsubstantiated by evidence and rejected by the scientific community? Or are they merely fabrications, beings imagined into existence by humans in need of a topic of conversation while they roast marshmallows around a campfire? This book doesn’t offer irrefutable proof that ghosts are real. It’s considered non-fiction, though, because it relates actual reports people have given about seeing ghosts. Although these reports are hearsay, they’re strangely persuasive in their prevalence. The book’s authors direct readers to perform their own research into ghosts, offering lists of resources (locations, books, DVDs, and Web sites) budding ghostologists might consult. What better time is there to study ghosts than Halloween? As the authors state, regardless of whether or not ghosts exist, stories about them are entertaining.

Good-bye for now, humans. I hope you enjoy my recommendations. You can also view my S.C.R.E.A.M. list from 2011 here. Please revisit Bigfoot Reads through the rest of October to view my friends’ lists which will reflect their personal tastes in Halloween reading treats.
at 10:00 PM

Greetings, Morzant. While I am deeply touched by your attempt to understand my book ("Your Skeleton is Showing"), I must also say that I am horribly dismayed by your reaction to these tragic case studies. Perhaps where you come from, the native life forms are amused by the spectacle of folks dying from nose picking, or being devoured by escalators, or expiring as a result of laughing with their mouths full of milk. On this planet, however, we do not laugh at the misfortunes of others. I would ask that you read the book again with the proper respect. Again, I appreciate your efforts.
Kurt Cyrus

Oh, dear! I was certain I had developed at least a rudimentary understanding of “dark humor.” I'm terribly sorry if in my ignorance I have offended you or any of your Earth fellows. Despite my grave error, the book is still appropriate to a Halloween recommended reading list. It’s merely more conventionally frightening than I realized.

Perhaps I overreacted. I do tend to get defensive sometimes. You seem like a nice alien.