Super Creepy Reading Extravaganza A la Mode:
Back for Seconds

I’m Violet and I love Halloween and I am going to tell you what I love most about Halloween and the thing I love most about Halloween isn’t candy. Bigfoot says that chocolate is bad for puppies. That is why every Halloween Bigfoot takes Lenny and me and Oliver to the library to trick-or-treat for books. We wear our Halloween costumes when we go and this year Lenny was a vampire pumpkin dog and I was a scary monster with antennae and sparkles on my tail and Oliver was a ghost. These are the books I got when I trick-or-treated at the library this year. 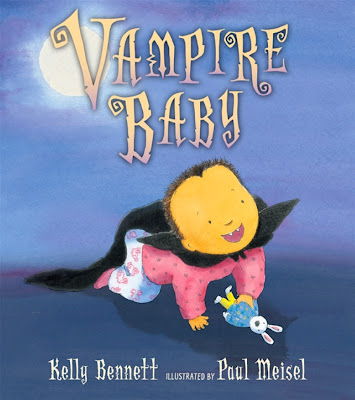 You probably know what a vampire is but in case you don’t know about vampires I will tell you that they are monsters who have fangs and like to drink blood and can turn into bats and only come out at night and are sometimes named Dracula. You don’t need to worry about vampires because they are only make-believe and also because sometimes in books vampires are nice instead of scary.

One nice vampire is in the picture book VAMPIRE BABY about a cute little baby named Tootie who has pointy teeth. Did you know that pointy teeth are also called fangs? They are and that is why Tootie’s big brother thinks Tootie is a vampire. She also likes to bite with her fangs and she also likes foods that are red like blood and she also is awake in the nighttime and those are more reasons Tootie’s big brother thinks she is a vampire. Tootie’s big brother decides his baby sister who is a vampire should go live with other vampires but in the end he decides he loves Tootie and he wants to keep her even though she bites him with her fangs.

This is a good book that is not scary at all because Tootie is a cute little vampire baby and maybe she isn’t even a vampire. Did you know that not everybody who has fangs is a vampire? I have fangs and I am not a vampire but maybe I will pretend to be one for Halloween next year and find a black cape to wear and learn how to turn into a bat. 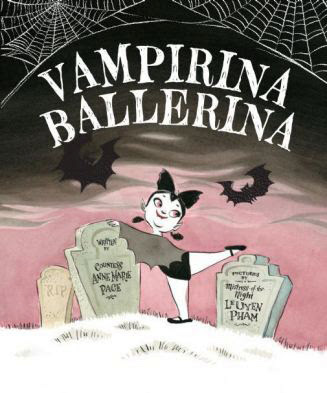 This picture book has a vampire in it too and her name is Vampirina and she has fangs and she lives in a big castle and she sleeps in a coffin and she wants to be a ballerina. And now you know everything about Vampirina except how she becomes a ballerina and she does that by taking ballet lessons and by practicing and practicing and practicing. She practices with a ghost in the attic and a mummy in the cellar and a skeleton in the graveyard but the ghost and the mummy and the skeleton aren’t scary because they are nice and they have fun helping Vampirina practice being a ballerina.

After all of their practicing the little girls put on a dance show and that is my favorite part because first they are a little scared to dance in the show but then they swoop and kick and leap and feel happy together because they are ballerinas.

This book has lots and lots of good pictures. My favorite is when Vampirina turns into a bat during ballet class because that is really funny. My other favorite picture is when Vampirina is practicing to be a ballerina with the ghost and the mummy and the skeleton. And my other favorite picture is all the rest of the pictures. I like the colors and Vampirina’s nightgown with spiders on it and the tutu she wears during the show at the end. 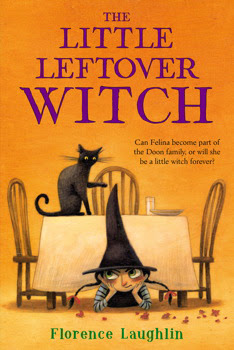 This book is called THE LITTLE LEFTOVER WITCH because it has a little leftover witch in it and the witch is named Felina and she is leftover because Halloween is over and she is left behind because her broom got broken and she couldn’t fly back to the place where witches live. There is a rule in the book and I don’t know if it is a magic rule or a witch rule but the rule is that witches can’t fly on their brooms unless it is Halloween. That means that Felina is stuck living for a whole year with a family that has a mom and a dad and a little girl named Lucinda and a cat named Itchabody.

At first Felina is grouchy because sometimes witches are grouchy and also because she is upset that she can’t go home and also because the family won’t feed her black-bat soup and jibbers’ gizzards and also because it is hard to be a witch when there are no other witches around. You might think that the mom and the dad and Lucinda and Itchabody wouldn’t like the little leftover witch because she is so grouchy but they like her a lot and are nice to her. Itchabody is extra happy because he likes being a witch’s cat instead of just a regular cat.

Felina gets to go to a birthday party and to school and to celebrate Christmas and to do all sorts of things that she never got to do before and by the time it is Halloween again she isn’t grouchy anymore and maybe she isn’t a witch anymore either. You will have to read the book to see what happens when it is Halloween again and whether Felina fixes her broom and flies back to the place where witches live. If you can only read books without chapters then you can have somebody read this book to you.

I know you will love these books and if you want to know some more good books to read you can look at my other Halloween list.

Dear Violet,
I am so glad you went to the library to Trick-or-Treat Books! thank you for these fab reviews--and for sharing Vampire Baby! Happy Halloween.

And don't forget to enter the I Vant My Vampire Baby contest. All you need to do is view the book trailer & leave a comment! http://www.youtube.com/watch?v=acEzh7iOhVU