A Message From Bigfoot:

I’ve been having trouble getting in the Christmas spirit this year. Don’t ask me why. I put up a tree and decorated it with ornaments I made when I was a kid. I drank eggnog. I ate donuts with green and red sprinkles. I took the puppies caroling. More like carol-howling, actually. I watched Linus explain the meaning of Christmas to Charlie Brown. But here it’s Christmas Eve and I don’t have that Christmassy feeling.

My friends are trying to help. They made this list of Christmassy books they say will help put me in the mood. I can think of worse ways to spend Christmas Eve than with a bunch of good books. (The Christmas Eve Morzant forced us to compare the tensile properties of Rice Krispies Treats to those of fruitcakes comes to mind.)

You know, having friends who would make this list for me is already starting to do the trick. Now, if only it would snow… 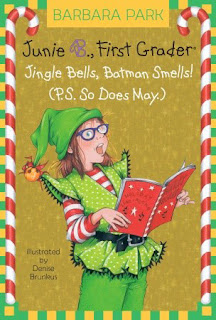 This is the perfect book to read to get in the Christmas spirit. Junie B. doesn’t get along with one of her classmates, May. May tends to tattle on Junie B. and Junie B. isn’t especially nice to May either. When she draws May’s name for the classroom Secret Santa exchange, she’s upset until she figures out the perfect gift for May—a charcoal briquette. Meanwhile, when she’s supposed to be picking out Christmas presents for her family, Junie B. finds something she wants for herself. It costs more than all the presents for her family put together. With her feeling so hateful toward May and caring more about getting something for herself than her family, Junie B. isn’t in the Christmas spirit for most of the story. But at the end, everything comes together in a perfect and surprising Christmassy way. 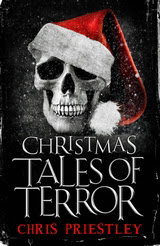 I like Christmas lights and carols and snow and all that, but I also like creepy stuff. Usually I think of Halloween as being the best time to read scary stories, but this year I found a scary Christmas eBook. It has seven super freaky, ultra eerie, keep-you-awake-with-fear-on-Christmas-Eve stories. In A Christmas Carol by Charles Dickens, mean old Ebenezer Scrooge is visited by a bunch of Christmas ghosts. The story is a little creepy because of the ghosts, but mostly it’s warm and fuzzy because the ghosts are good. They visit Scrooge to warn him that he’d better be good for goodness sakes or bad things will happen to him and, at the end, Scrooge is nicer and lives happily ever after.

Most of the characters in CHRISTMAS TALES OF TERROR aren’t very nice to begin with either, but instead of getting a friendly nudge to mend their ways, they get a dose of creepy Christmas comeuppance. The characters mostly don’t live happily ever after, and some don’t live ever after period.

All the stories build off familiar Christmas traditions, so they make you look at Christmas in a new, spooky light. This is extra thrilling and chilling while reading by the familiar old lights on your Christmas tree. 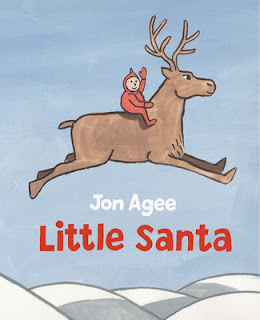 This book has everything a Christmas book needs. It has snow, flying reindeer, elves, Santa Claus, and a good story. It’s about Santa as a little boy. He and his family live in the North Pole. He has two parents, three brothers, three sisters, and a dog. It’s hard work to live in the North Pole. They cut firewood to keep them warm. They shovel snow all the time. They ice fish.

Only Santa likes living in the North Pole. He makes snowmen and likes to decorate trees and make gingerbread cookies. His favorite thing to do is go down the chimney. The rest of his family wants to move to Florida.

They’re getting ready to move, but there’s a blizzard. It snows so much the Claus family gets trapped in their house. Santa goes out the chimney. He goes to find somebody to help dig his family out of the house. He meets a reindeer who can fly. Together they find lots of elves who live together in a big house. The elves are nice. They make shovels and a sleigh so they can fly back to Santa’s house and help his family.

The elves help the family with their North Pole chores, too. That makes the family happy, but they still want to leave the North Pole. Santa doesn’t go to Florida with them. He stays with the elves and grows up to be the Santa Claus we all know. 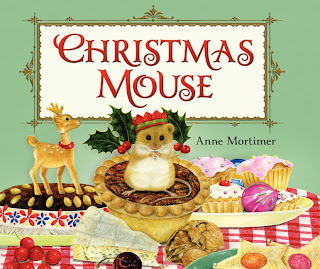 Christmas isn’t just one fun day when you get presents. I like all the days that come before Christmas day when you get to decorate and sing and make cookies. The mouse in this book knows that getting ready for Christmas is the best part. He decorates and sings. He puts presents underneath the tree. He shares gingerbread with a friend. He even leaves a present for a cat. That’s very Christmassy because cats and mice don’t usually get along. During Christmastime everybody remembers to be nice.

Getting ready for Christmas means seeing lots of colors. In this book there are colorful Christmas goodies that make me drool. There are colorful wrapped-up presents under the tree. The author of the book made the pictures, too. She makes the mouse and cat look soft and furry and the ornaments look bright and shiny.

My favorite picture is at the end when the mouse cozies up in his stocking to go to sleep on Christmas Eve. He’s tired out from getting ready for Christmas. Santa will have to be careful not to wake him up when he fills the mouse’s stocking. 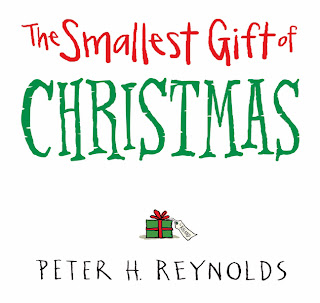 I like Christmas decorations and Christmas cookies and Christmas carols and Christmas parties and Christmas cards and I also like Christmas presents. The boy in this book likes Christmas presents too and that is probably his favorite part of Christmas. The boy’s name is Roland and he is excited about Christmas morning because he wants to get presents. But Roland is angry on Christmas morning when he sees that the wrapped-up box for him under the tree is small. He thinks nothing very good could be in such a small box. Roland wishes for a bigger present and his wish works because the wrapped-up box gets bigger. But do you know what? Roland still doesn’t think the wrapped-up box is big enough so he wishes again and again and again and the wrapped-up box gets bigger and bigger and bigger until it’s almost as big as his house and then it’s as big as a tall building. I would like a wrapped-up box as big as a building because it would be big enough to hold a million cookies or a flying elephant named Bob. But do you know what? Roland still doesn’t think the present is big enough so he goes looking for an even bigger present and he goes really, really, really far away from home. I won’t tell you where he goes because that will ruin the surprise but I will tell you that Roland learns that small presents are the best presents and then he is happy on Christmas.